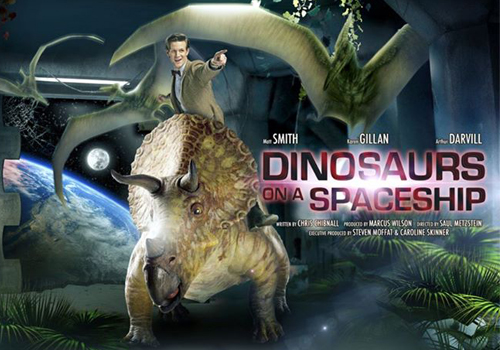 Review: Doctor Who – Dinosaurs on a Spaceship

Dinosaurs on a Spaceship is the best Doctor Who episode we’ve had in a long time and to anyone who disagrees: “No! YOU’RE a TARDIS!”

This episode can only be described as a rip-roaring, delightfully dinosaur-y romp! It has so much fun, adventure and action to it that I’m hard-pressed to think of another episode that gives you more bang for your buck. Between brilliant CGI and animatronics and top-notch acting performances from all of the cast, this episode offers up so much and then continues delivering.

Soon after saving Queen Nefertiti, the Doctor is brought in on the case of a wayward spaceship heading towards Earth with the Indian Space Agency. After quickly assessing the situation, he grabs Neffy, John Riddell (A 1900 South African game hunter) and the Ponds. Plus Rory’s dad. Soon, they’re already onboard and discovering the ship’s cargo: dinosaurs. This is all before the credits! This series sets a relentless pace and hardly slows down as it bounds through the main plot and towards its satisfying conclusion.

I’m gonna skip retelling the plot beat for beat but I will talk about the performances this episode. The main trio knock it out of the park as usual, whether it be Smith coming at us with a more ruthless Doctor, Amy acting a little more like her raggedy man or Rory showing his badassery and nursing skills but the rest of the gang put in fantastic work too, making each of their characters memorable even if we never see them again.
Rupert Graves plays the typical macho hero but he plays well alongside Nefertiti and Amy, both of whom take issue with his misogyny and are quite vocal about it. Nefertiti is played by Riann Steele who plays her a little like River Song but with more of a royal edge. There’s no damsels in distress this episode, unless you count Mark Williams who is the dumb-founded newcomer to the gang. Yes, it’s actually a gang, the Doctor says so. The bumbling, condescending father of Rory is someone we can all identify with because we all know this person. He’s the EveryDad, the know-it-all who has everything you never want in his pockets but somehow always need. He’s a fun character and I hope we see him again soon
Rounding out the episode is the villains, David Bradley (Filch from the Potter movies) and two sassy robots who are actually voiced by comedy duo, Mitchell and Webb (I didn’t actually realise ‘til my second watch) and damn if this all-star cast doesn’t show how great this show can be when they put some effort into the casting as well as the writing.

The effects, both computer generated and practical are gorgeous. When you feel endearment and love for a piece of rubber slobbering on Mark William, it shows that they put effort into making these creatures feel real. Obligatory raptors show up eventually and there’s a few other dinos too.

This is an F***ing amazing episode and there are few that can match it for sheer spectacle. It has everything I love in Doctor Who and just showcases it to it’s best and I highly recommend viewing this episode.

Now, that is just my opinion and it’s been brought to my attention that a few of the more vocal detractors to the episode (and the show in general since Moffat took over) launched a campaign of hate against Stephen Moffat, so much so that he quit Twitter altogether in response to the attack.
You people are the worst kind of scum. He works his ass off to bring you quality entertainment and all you fucking people can do is deride him for it? Fuck you! Fuck you and all you stand for, you uppity assholes. He’s a human being, damn it. Show some fucking common courtesy. Don’t like it? Tough, because as the Doctor himself would say: I’ll see you good people back next week for another episode! Stay Tuned!