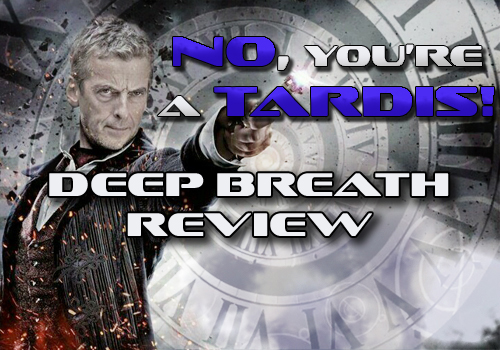 Insert obligatory Malcolm Tucker quote here for comedic effect. Season 8 of Doctor Who is here and it’s already taken my breath away! Ow. OW! Was that a shoe!? Anyway, Deep Breath is how we kick off a new season with a new Doctor and it’s always good to see some old favourites as the Paternoster Gang (or as I call them, the Bakerstreet Irregulars) return to give us some Victorian hi-jinks.

This being a regeneration story, it’s amazing how much time we spend with the Paternoster Gang, developing them a little more and more Strax hi-jinks. One of the major insights we get is into the relationship between Madame Vastra and Jenny Flynt. Naturally, as an interspecies lesbian married couple, they’re already pretty interesting to watch in terms of character dynamics but we find out that while they present the veneer of master and maid to the outside world, it kind of bleeds into their home life, something that Jenny takes exception to. There’s also the fact that Vastra has a bit of a wandering eye and can be quite flirtatious with other women. They’re by no means a perfect couple but their affection feels legitimate and I think that makes them feel like better characters, with a fun back and forth that makes them a delight to watch.

Strax is also funny as usual, with Clara acting as his straight man for many scenes. Not much in terms of character development but he’s the comedic potato and that’s good enough for me.

The villain of the week is actually a nice throwback to an older episode. Tell me if this sounds familiar! Clockwork robots, cannibalising humans for spares and repairs? That’s right, these are the same clockwork droids from Season 2’s The Girl in The Fireplace. Well, not the same exact robots, these being from the sistership of the SS Madame de Pompadour, the SS Marie Antoinette. They’re okay antagonists but they’re really there to job out to the new Doctor and not a lot else.

Clara’s role this episode is as audience proxy, naturally. This isn’t our prancing, young handsome Doctor and that’s just not on! Or do we need to accept that this old dude is the new norm and accept that he’s still the Doctor? Of course we do, this may be a radical change for fans who have only seen the revived series but this old hat for older fans.

Peter Capaldi’s first outing is manic, delusional and all together unsettling. His mad ramblings and underlying hostility to everything around him has shades of dementia to it, as he struggles with his new face. Since Capaldi has already appeared in Who (namely Season 4) it’s good that they address it as the Doctor struggles to remember who this face belongs to and where he’s seen it before. Capaldi also has some fun with his new Scottish accent. Being his first outing, I’m still not sure on this Doctor’s personality but his underlying principles are still the same. And finally, we come to this lady. Half-Face awakens in a seeming paradise and Missy is there to welcome him. She claims to be the Doctor’s girlfriend and instantly establishes herself as untrustworthy and devious. She clearly has an agenda and will be the over-arcing villain for this season.

This episode sets the tone for the upcoming season quite effectively, coming off as so much darker and less whimsical than previous seasons. The villain tries to escape in a hot air balloon MADE OUT OF SKIN! If that’s not an indication of how dark this season’s going, I don’t know what is. A disorienting 76minute affair but a solid story and a nice set up for the stories ahead. Thanks for reading and I’ll catch you guys next week!