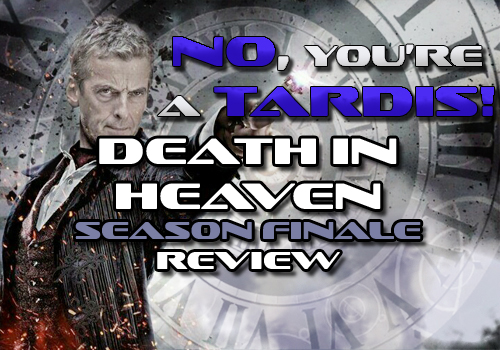 Doctor Who season eight comes to a close with Death in Heaven, a thoroughly dreary and depressing affair and something of a lacklustre finale, only saved by the performances of most of the cast.

The Clara Backdown can finally end because Jenna Coleman’s character, veteran of a season and a half, ends her tenure as a companion and I breath a huge sigh of relief. Clara could be a fantastic character at times but, as a whole, she is the wrong kind of companion for Capaldi’s Doctor. In a fun moment at the start of the episode, after Clara declares herself to be the Doctor, the credits roll and Jenna Coleman’s name swaps places with Capaldi’s, and her eyes replace his later in the credits. It’s a clever little wink to the audience. The final goodbye between the Doctor and Clara is a microcosm of their emotional relationship. Even knowing they’ll never see each other again, they’re all too willing to lie to one another, perfectly summed up in the line: “Never trust a hug, you can’t see someone’s face.”

Danny gets the short end of the stick, first getting jobbed out by a car and becoming a hired goon in a Cyber-Suit for Missy. His performance is strong as steel and gets a big damn hero moment and a speech worthy of Stacker Pentecost. Still, Samuel Anderson is a fantastic actor and despite getting dumped on all season, I hope to see him in other stuff in the future. Guest stars come thick and fast, with the return of Jemma Redgrave and Ingrid Oliver as Kate Stewart and Osgood, respectively. Kate is still living up to her father’s legacy and I’m glad she keeps appearing, another case of a character we need to see more of. Osgood… Poor sweet and smart and adorable Osgood… I’m pretty bummed by her death, more so than Danny. Danny got to be a badass, Osgood was little more than fodder and that’s just plain wrong. Sanjeev Bhaskar also guest stars but his role primarily consists of saying “It was Captain Scarlet” and getting sucked out of a plane window. Such a waste of a good actor. We also get the return of… THE BRIGADIER! In a last minute save, a now Cyberised Brigadier saved his daughter after she fell from the plane and finally gets that salute he always wanted from the Doctor. Then he flies off, presumably to solder on a metal moustache and fight aliens as CyberBrig.

Missy; aka The Master, aka Missy Poppins, aka Michelle Gomez takes the performance from last week and dials it up to Heath Ledger! Obviously taking some elements from John Simm’s Master and adding her own hectic, bat-shit-insane mannerisms to it. Gomez is a very express and energetic actress and I’m glad to see that transfer into her performance as the Doctor’s oldest nemesis. Missy escaped thanks to the Doctors’ intervention and moving Gallifrey out of time (Thus negating John Simm’s tenure as the Master?). Her ultimate fate is mysterious, as the effect of her being vaporised is the same as the teleportation she used earlier so perhaps she can return in the future!

Peter Capaldi’s first season as the Doctor has been very rocky. Inconsistent writing, coupled with the wrong companion has made this whole season very lacklustre, despite some very strong episodes and performances by him. As the Doctor and Clara part ways and the credits roll, we suddenly cut back into the TARDIS with a melancholy Doctor and a booming voice at the door. Our mysterious caller enters the TARDIS and…

Nick Frost as Santa in a Doctor Who episode homaging John Carpenter’s The Thing? SOLD! I’ll see you guys at Christmas!