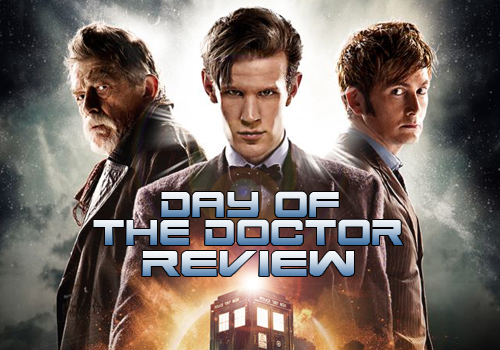 Review: Doctor Who – Day of The Doctor

Where do I even begin?

A round of applause for starters.

And then on to episode spoilers so if you haven’t already; go watch it, you nerd!
Doctor Who “An Unearthly Child” was first broadcast on the 23rd of November 1963. 50 years. 50 years of aliens and running and sonic screwdrivers and a madman with a big blue box. I really don’t know where to begin, folks. How do I properly review an event 50 years in the making? Do I even have the words to describe the tangible sense of excitement felt on Saturday night as 70 countries around the world tuned into the 50th Anniversary of Doctor Who? Short answer, no. Long answer, NOOOOOOOOOOOOOOOPE.

Let’s start with where the story starts, with Steven Moffat. Moffat took over as show runner in 2010 with the 11th Doctor, Matt Smith. His work on the show since the revival in 2005 and ongoing as Head Writer has been stellar. He’s created some of the creepiest monsters and some of the most acclaimed episodes of the revival; including Blink, The Empty Child, Silence in The Library and, of course, Curse of The Fatal Death. In Day of The Doctor, he’s taken one of the darkest parts of the Doctor’s life and made it something else. He turned it into something hopeful.

The Last Great Time War was a defining subplot of the 9th and 10th Doctors, as they came to terms with their decision to commit genocide against his own race and against the Daleks. It haunted him but when 11 came, he seemed to have come to terms with it, even acting glib about the subject. Now past and future collide as John Hurt’s War Doctor comes face to face with the fallout of his decision in the form of the 10th and 11th Doctors.
The Moment (a sentient doomsday weapon with the body of Rose “Bad Wolf” Tyler) gives the War Doctor a glimpse into the consequences of his actions and while you’d think this would become a rather sombre affair, the War Doctor is very endearing. He’s almost like a jovial grandad trying to make sense of his younger counterparts. John Hurt brings such warmth and charm to the role that you can’t help but love him as he totters alongside the youthful Tennant and Smith. Tennant returns as the 10th Doctor and he hits the ground running, like he never stopped. His energy, enthusiasm and wit hasn’t escaped him as he flawlessly bounds about, making funny noises and macking on Royalty. Matt Smith ties the trio together as the current Doctor, and is on form as usual. There’s nothing really to say about him. He’s bringing his A-Game.

As well as the main plot, we also have the B-Plot in the form of Zygons (in only their second TV appearance) and the return of Kate Stewart, the Brigadier’s daughter and the current head of UNIT. It’s a fun little diversion, showcasing an older villain and making them a little more terrifying than they ought to be (Seriously, that transformation sequence was gross). A solution is concocted by the three Docs and alls well that ends well with that portion of the story. It makes for an interesting counterpoint and allegory for the A-Plot.

The real meat of the story is the ultimate decision. The destruction of Gallifrey and the end of the Time War. As the War Doctor returns to his time to make the choice, his successors follow and offer to share the burden. It’s a really touching scene as they all put a hand on the big red button and John Hurt whispers a heartfelt thank you. Granted, they would actually show Three Doctors murder 2.47 billion children ON SCREEN. That just wouldn’t be cricket, and in a genius play by Moffat, the three come up with a plan that will save Gallifrey but keep their timeline intact and offer up an ongoing arc to Season 8. But it’s not just the Three Doctors, ohhhhhh no. In the most epic scene of Doctor Who since Demon’s Run, every regeneration returns to lend support in the rescue effort. A dozen TARDIS’ swarm the skies of Gallifrey, each relaying messages to an equally baffled and horrified Gallifreian General who can’t believe there’s twelve of them.

“No, sir. All thirteen!” is the rallying cry of the 13th Doctor, Peter Capaldi, shown just for a split second as his piercing eyes make every member of the audience cheer “FUCK YEAH!”. Gallifrey disappears, the day is saved and the three Doctors are left discussing the painting from earlier. It’s a very touching farewell for John Hurt and, what I feel to be, a very sincere, 4th wall-breaking, thank you for the chance to play the Doctor. Tennant and Smith also exchange a few kind words, including Tennant quoting Hartnell and a sly jab at his own departure. Smith’s Doctor is left alone with the painting and much to everyone’s surprise, yet another Doctor shows up. A possible future Doctor. All very mysterious. We end on a group shot and a promise of adventure to come. The world collectively catches its breath as credits roll.

Naturally, this is a must-see episode. It’s a huge event for any television series, not just Doctor Who. With the combined acting chops of Matt Smith, David Tennant and John Hurt, you’re in for a rollercoaster adventure through time with plenty jokes, action and pathos for everyone. Jenna Louise-Coleman and Billie provide support quite well as the ever faithful Clara and the mysterious Bad Wolf entity, respectively. I’ll actually admit that I enjoyed this version of Billie Piper much more than her previous appearances. Everyone was on top of their game in the acting department. Stephen Moffat wrote an amazing story and I truly believe everyone should watch it.

There’s nothing much more to say except that if you want to give your opinions, you can in the comments below and we’ll be back at Christmas for Matt Smith’s final journey as the Doctor in… What? What do you mean they haven’t announced the episode title!? Fine. See you at Christmas, folks!