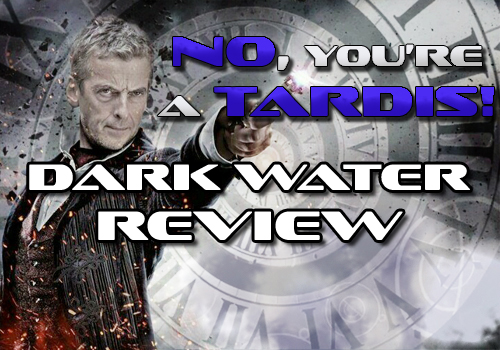 After watching Dark Water, I looked back on the season and realised that the over-arcing theme of darkness was barely present, only two episodes really lived up to that potential. Don’t get me wrong, there were still great episodes this season but compared to Dark Water, most of them are weak sauce.

Dark Water doesn’t pull its punches from the get-go when Danny is ploughed down by a car before the credits. Jaysus… I know I wanted this season to be darker but still… Danny Pink was cool. Not cool, show. Naturally, Clara is traumatised but her wheels are already turning on a plan. She is purposely going to betray her friendship with the Doctor to get Danny back and for the first time in who knows how long, I actually admire Clara. She’s got some chops to pull this stunt and I’m actually impressed with her preparation, stealing all spare TARDIS keys and knocking the Doctor out after asking to see a volcano. This plan is pretty genius and, even more shockingly, Clara follows through and throws all of the keys into the lava! It’s a brilliant strategy and even after the shock of what she’s done hits her, she still admits that she’d do it again, even before this scenario is revealed to be a dream state. It’s an incredible show of strength on Clara’s part and Jenna Coleman plays it very strongly but it’s just a shame that she’s just kinda… there for the rest of the episode. Luckily, Capaldi is on hand to carry this episode.

The Doctor, despite being betrayed, cares far too much for Clara for that to matter and takes her to the Nethersphere to where he gets be an asshole to guys in suits, which is fun. He gets molested by Missy, who is pretending to be an overly amorous android and threatens to beat someone with a shoe! He realises a little too late that the skeletons in the cells are actually Cybermen. Just a shame that a lot of promo material spoiled this because they clues would have been cool to solve on their own merit but if someone didn’t see trailers and such, this would have been a fun little mystery.

The various guest characters are pretty solid. Seb, played by Thick of It’s Chris Addison, is a delightful dickbag who condescends Danny in his post-death confusion and then there’s Dr. Chang who reveals what 3W means and that’s pretty gruesome and that‘s what makes this episode so fantastic! There’s also a small boy that Danny killed during wartime, something that’s been alluded to before. Sort of predictable but Samuel Anderson plays out Danny’s grief as well as can be expected.

SO! That Missy reveal, huh? People (including myself) had been speculating her identity since the start of the season and it’s finally revealed that she’s the Master, or rather, the Mistress. While the reveal is awesome, it couldn’t have been the Rani? Or maybe an embittered Romana? Regardless, Michelle Gomez is fully channeling John Simms’ particular brand of Master Madness which makes her quite entertaining. With a Monty Python reference, she initiates the Cyberman invasion of six dudes. I found it funny that this was the extent of the enemy force after the whole “the dead outnumber the living” line. It’s an awesome line but kind of undercut by having only 6 dudes in Cyber-suits.

Dark Water is a fantastic start to the season finale but you don’t need me to tell you that, you saw it! I’m excited to see where this goes so I’ll see you next week for Death in Heaven.