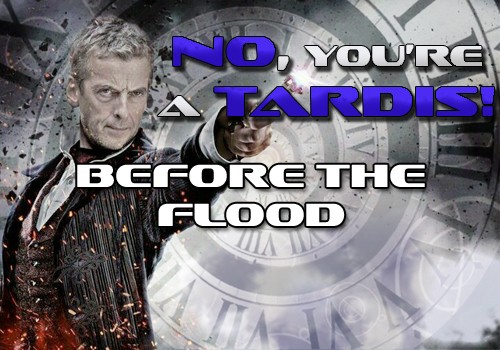 Review: Doctor Who – Before The Flood

Oh boy… Yet another episode with cool concepts made mediocre by bad plot and blatant pandering (the bad kind, not the good kind we like on this website).

The Bootstrap Paradox is an interesting concept to say the least. It’s an endless loop of idea generation that is quintessentially Who. I loved it. Not so sure about breaking the fourth wall to do it though… The Doctor talking to the audience is usually something reserved for promos and it just feels… out of place in an actual episode. Bonus points for the Magpie Electricals nod and for Capaldi (presumably) riffing the Doctor Who theme.

There’s also a nice nod to the Timelord Victorious when the Doctor decides he’ll fuck with time to save Clara and the TARDIS puts a stop to that sharpish. The old girl is learning.

Oh, Clara. You callous tumblr-fodder, you. I can’t wait for you to die or, better yet, for the Doctor to realise that you’re not the person you once were and to abandon you. I’ve never wanted a companion gone as much as Clara now, and that’s saying something considering we’ve had Martha, but even she would never put the lives of innocents below her own. Shame on you, Clara. Jenna Coleman deserves a better role than this.

You know who would make better companions? Cass/Lunn and O’Donnell.

O’Donnell. The companion who should have been. Another case of a Doctor fan being a fun character and companion potential being cut down. Just like poor Osgood. Shame.

On the plus side, O’Donnell is a font of foreshadowing and fun references. The Fisher King also gets side-lined, despite being a really impressive creature with a haunting voice. Again, a shame and a waste.

Another mediocre two-parter, with interesting concepts that are left by the way-side for the sake of shipping. Hopefully, Jamie Mathieson’s return will herald a genuinely good episode with Vikings and dragons and Game of Thrones’ stars but given Moffat’s involvement… I won’t hold my breath for The Girl Who Died.