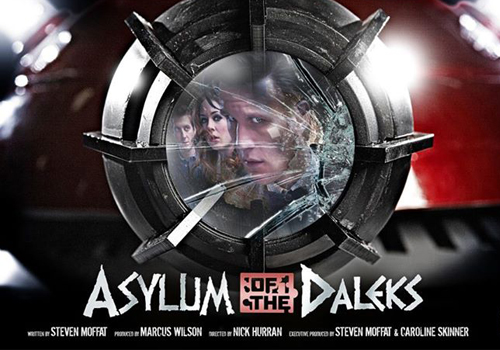 Review: Doctor Who – Asylum of The Daleks

It’s back! Who returns to DOOM with a bang and while some of us DOOMies didn’t have the pleasure of watching the premiere episode of the 7th Season with the 7th Doctor Sylvester McCoy, we still stand firm in our belief that “No, YOU’RE a TARDIS!”

Seriously, you guys. Aaron is a jammy git.

So anyway, the 7th season (33rd Season, if you’re feeling saucy) kicks off with Asylum of The Daleks, an immensely strong episode in my view with only minor flaws that can be overlooked by the presence of a Heavy Weapons Dalek! Oh yeah, SPOILERS shall be thick and fast in this review so if you haven’t seen the episode yet, what kind of Whovian are you? Whovian? No, never saying that again!

First thing to hit you is the fact that Amy and Rory are no longer married. Yeah, kind of a bummer and probably explained in the Pond Life web-exclusive miniseries before this aired but still, pretty shocking to see all the animosity between The Girl Who Waited and The Last Centurion. And, can I just say, whoever gave Arthur Darvill that ridiculous hairdo should be fired and sent back to the 50’s where they belong? He looks ridiculous, show the Roman some goddamn respect. But I am fond of his little lunchbox though (Ladies….)

Doctor and Companions are reunited after the trio are teleported to the Parliament of the Daleks by some Human-Daleks. No, no, not that pin-striped shoggoth from Daleks Take Manhattan. These are partially converted Dalek puppets with stalks coming out of their head. It’s silly but creepy too so fitting the theme of this episode perfectly. Like an ex-girlfriend, the Daleks come a-calling when they need something and they want the Doctor to save them from a planet full of insane Daleks. Yeah, you know these have got to be some monstrous wheelie bins if regular Daleks consider them “insane”. Then again, they don’t act all that out of character so really, it’s an excuse to introduce a character I will talk about in a minute. So, off the trio goes but once they’ve been shot at the planet, they find themselves separated, assaulted on all sides and being flirted with by the sole survivor of a ship crash, Oswin. Oswin is brilliant. She’s smart, funny, flirtatious, immensely cute and played by Jenna-Louise Coleman. Yes, she who will be playing the new companion, Clara. I’m sure there’s a connection between the characters but we’ll ignore that for now because her introduction isn’t ‘til the Christmas special. But as her first outing, Coleman puts in a fantastic performance that makes you care about her and hope to see more of her in the future.

Matt Smith comes back strong and we see a more hardened Doctor when facing the Daleks. He’s slowly becoming more of what River Song warned him about as we find out the Dalek’s name for him (Y’know, apart from “The Oncoming Storm”) is “The Predator”. That’s kinda dumb. Not quite as dumb as Amy and Rory’s domestic later in the episode but still kinda dumb. Oh, hey! Heavy Weapons Dalek! Told you that would make up for the flaws. Asylum of The Daleks is a strong return to the show and a helluva lot stronger than previous season premieres. It’s got a dark and sinister atmosphere that is brilliantly counterbalanced by the comedy and character interaction. Join us next time as we encounter Dinosaurs. ON A SPACESHIP!!!