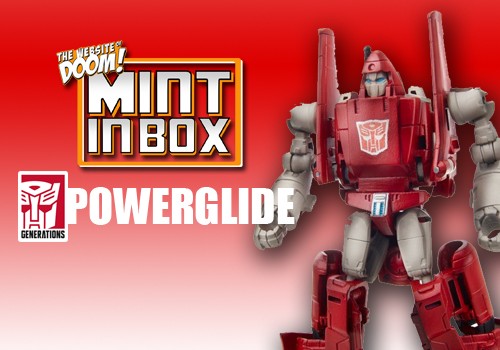 Powerglide has always been a firm favourite of mine since I was a kid, you can blame a very well-loved VHS tape with The Girl Who Loved Powerglide on it. As such, when I saw that the new Transformers Combiner Wars line was going to be featuring one of my favourite ‘Bots, I jumped at the chance as soon as I saw him in-store! The new Legends scale packaging for the Generations line is slick as hell! It’s crisp and stylish and I kinda dig it. What I don’t dig are the Collector Cards that are bundled in with every figure now. We get it, Hasbro, you need to get your money’s worth out of all that Transformers Legends artwork you paid for… Powerglide transforms into a stylised A-10 Thunderbolt II and it’s entirely serviceable. What do you want, he looks like a better version of his original version? Okay, the back end on my figure likes to bend where his conspicuous knee-joints are but it’s not that bad. And his fins are loose as hell… And his fuselage is wonky. Okay so it’s not GREAT. Like I said, serviceable. The new moulds in the Generations like are pulling double-duty as either components to their thematic Combiner or, in Powerglide’s case, as Targetmasters. Yes, Powerglide adds triple-changing into his arsenal by becoming a gun so heft that only five guys combined into one can wield him! It’s not a bad form to be fair. Powerglide’s robot mode is what I bought this guy for because he is spot-on, tip-top, G1 awesomesauce! The delicious red, the huge Autobot symbol, that FACE. Mmmm, perfic’! He has a decent amount of articulation, pulling off all the poses you’d want him to but I’d have loved a bicep swivel so he could pose hands-on-hips. Powerglide is a fantastic little figure but your mileage may vary but I love him and he’ll fit in right alongside his Minibot update brethren.