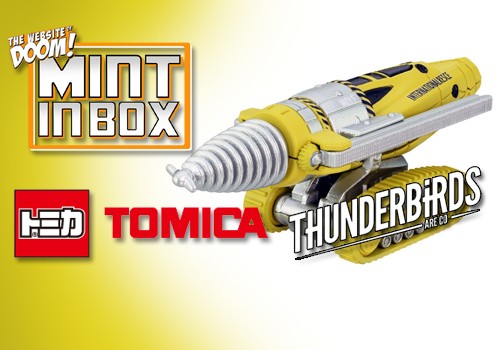 The original Thunderbirds series was a huge success in Japan, garnering a huge following and the vehicles have been part of the modelling culture there for decades so when Thunderbirds Are Go hit the shores of Nippon, you just knew that they’d take this new show to heart.

And they did! As well as model kits and other merchandise; Tomica, a Hot Wheels/Matchbox style line of die-cast cars produced a number of vehicles for the show and, best of all, included vehicles we hadn’t gotten here in the West! Today’s spotlight is on one such entry – Tomica Thunderbirds 08 Jet Mogura aka The Mole! Unlike the bubble card packaging we might be used to, The Mole comes this dinky little box that gives it a unique, almost premium, feel that is wholly unique to Japan. Out of the box and this die-cast digger doesn’t disappoint! Its hefty for it’s size and the details and paint are just astounding. The plastic for the drill and treads along the pod’s shaft aren’t as shiny as the promo photos would lead you to believe but the rubber rolling treads on the bottom more than make up for that. If there was one downside, it would be the lack of a tilting hinge or the pod being detachable but I’m sure if there are any larger versions produced then we’ll see that implemented (Looking at you, R/C Mole) Size-wise, when compared to the Thunderbird 4 included in the 4-pack of vehicles I reviewed before, The Mole seems massive. By rights, it should be but the new series has The Mole as just on of many modular modes for the pod vehicles It scales well with Thunderbird 2 at least and can almost fit into the pod but is just a little too big. Overall, I really dig this little vehicle and I highly recommend the rest of the Tomica Thunderbirds line since it’s the only place you’ll be getting models for Thunerbird 5, Lady’s Penelope’s car, The Mole and even the Thunderbird Shadow. Go digging online and you’ll no doubt unearth a bargain but for now, I’ll catch you guys next time on Mint in Box!