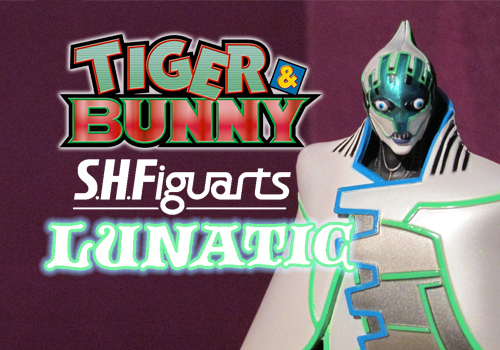 Is this your idea of Justice?
Tiger & Bunny is an anime from 2011, set in a futuristic city where heroes with mutant-like abilites (called NEXT) fight crime whilst promoting real life sponsors (Pepsi, Bandai, Amazon.jp, etc) and competing to become King of Heroes! It’s a clever take on the superhero genre and I highly recommend that you watch it but today we’ll be looking at the S.H. Figuarts offerings from the show but instead of looking at the titular Tiger & Bunny (Wild Tiger and Barnaby Brooks Jr) we’ll be looking at the unsponsored anti-hero, Lunatic. Yuri Petrov, child of a legendary hero and masked vigilante known as Lunatic is perfectly recreated in S.H. Figuarts in a very impressive release. The box itself is thick, indicating just how much stuff is packed into this release. The packaging itself is wonderfully executed, matching the tone of the character while still following the same general aesthetic as other figures in this line. The back has lots of great images showing the figure off and even his animated civilian identity. Straight out of the gate, Lunatic includes a Tamashii stage emblazoned with his name and alter ego. This is brilliant and it’s always nice to have a stage included with a Figuart and all the Tiger & Bunny figures include a personalised stage much like this one. Lunatic himself comes straight out of the packaging looking spot on to his onscreen counterpart. His spindly physique is a far cry from the Sentai Figuarts I’ve reviewed before, being more slender and but the anime proportions work incredibly well to give this release exceptional poseability. One thing I marveled at was all the little details and accoutrements on the costume that I never really noticed on the show and Lunatic’s bizzare mask is beautifully bug-eyed! There’s also an alternate head for when he gets all righteous! As with all S.H. Figuarts, the proof is in the accesories and, boy, does Lunatic come loaded! Along with fists, Lunatic comes with posing hands, trigger fingers, and two pairs of hands covered in translucent blue/green flames. One pair more suited towards combat poses and the other for intense intimidation. The flame effects are removable, maybe a little TOO removable since they like to crumble if mishandled, but it’s nice to have more alternative hands. He also comes with two versions his signature crossbow, one closed and the other for when he forms his flame into bolts. Both look freaking badass! There’s actually a second tray of parts in this release, hence the thickness of the package (Ladies…) that includes his poncho/cloak. This iconic part of the Lunatic costume is rendered in hard plastic and attaches by clamshelling two halves over Lunatic’s shoulders. The back piece is universal but there are two front pieces, one for regular standing poses and the other for use with his crossbow or flame effect hands. The details are crisp and apart from one minor flaw where the gorgeous pearlescent white paint didn’t take on the back, it is a welcome inclusion. …Let me see your idea of JUSTICE!

I was kindly loaned this figure to review by a friend whom I introduced to both Tiger & Bunny and to S.H. Figuarts. This was his first Figuart and was giddy when he came to show it off, so much so that he wanted me to review it so special thanks to Mitch for this opportunity! You should be ashamed… But I will show you mercy…

Lunatic, as both an introduction to S.H. Figuarts and from my perspective as a fan of the line, is a fantastic figure to own. His articulation, the effect parts and accesories and the overall presentation makes this a superb example of the level of detail and love that S.H. Figuarts puts into their releases. If you’re a fan of the anime, or even just interested in awesome action figures, Lunatic is highly recommended! HEAR THE VOICE OF THANATOS!