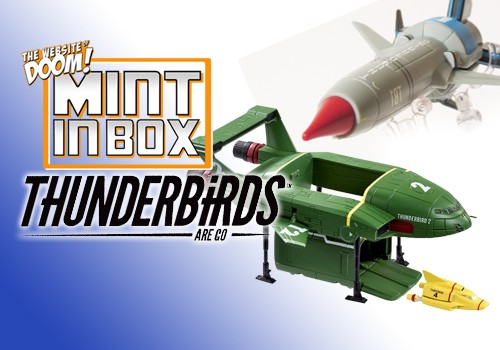 Mint in Box is rescue ready!

Thunderbirds really are go with the second half of the season coming soon and still riding high from the return of a television legend, I’m proud to showcase the Thunderbirds Are Go 4-Piece Vehicle Super Set from Vivid Imaginations! The packaging is very oddly shaped. I don’t quite get why it’s this way but then some other companies have been adding flat corners to packaging so maybe I’m just not down with Paul from Marketing. Regardless, the rich blues and variety of colours is very indicative of the vehicles held inside and, naturally, we’ll kick off with: Thunderbird 1 – The first responder to many disasters and Scott Tracy’s personal craft. The updated design doesn’t do much to improve on the original and the toy reflects that. It’s iconic! It’s dynamic! It’s other words ending in ‘ic’. The action feature involves twisting the thruster assembly to unfold the wings. Simple, neat and effective. The 3-4 seemingly random sounds are crystal clear and, unless I’m wrong, are the actual voices of the pilots, which is refreshing. A solid kick-off point. Thunderbird 2 has always been my favourite since childhood so the new updated version really tickles my fancy. Being the heavy duty equipment courier, TB2 naturally has the most action features. Fold-up wings, deploying landing struts and the iconic pod are all present. I’m a little disappointed that the pod features no ‘4’ decal but I imagine it would get scuffed over time. Another sampling of 3-4 phrases cycle through randomly but one phrase seems rarer than the others. ‘Copy that, Thunderbird 4’ plays very seldom and I don’t think there’s a knack to triggering it. Thunderbird 3 is the space exploration vehicle and was always my least favourite as a kid, probably because it did nothing but be a rocket but the 2015 edition comes with some extra bells and whistles. The grey fuselage can be rotated to activate the sounds and pressing the main circular thruster on the bottom with activate TB3’s grapple arms. It’s a fantastic little action feature but unfortunately, one of my struts was broken right out of the packaging, the spring must have been misaligned somewhere in the guts of the toy which is a damn shame. Thunderbird 4 is a plastic lump. There’s no other way to say it. While it is very well sculpted and painted, being a fantastic representation of the brilliant 2015 design, it has no action features, simply being able to fit inside TB2’s pod. That’s perfectly fine because it’s such a small piece but the thing that bothers me most is that it doesn’t float. That’s right! I tested it in my sink and while the pod will float, TB4 sadly will not, sinking to the bottom with a soft thud. Overall, I can highly recommend the super set, not only because it includes 4 of the 5 Thunderbird craft, all of which a pretty fun to play with but also as a cost-saving measure. Each Thunderbird in this set is available in stand-alone packs but buying them all together in this particular set will save you roughly £7 off the RRP when compared to single releases.

The Thunderbirds Are Go 4-Piece Vehicle Super Set is available from most toy retailers and online for an RRP of £29.99