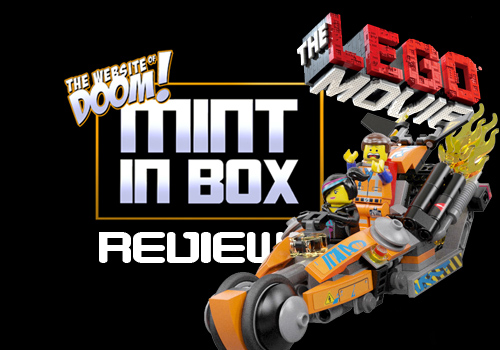 This LEGO Movie set is, indeed, AWESOME!
Ever since I covered the original trailer, the hype train has been steadily gaining momentum and thanks to the rave reviews coming out of the States, from both review sites and my own Doom colleagues, I’m glad my faith wasn’t misplaced and I’m super thankful to receive a LEGO Movie set to review for you lovely people with the UK release mere days away! The 70808 Super Cycle Chase set is the most iconic of the sets, at least in my eyes. It’s featured heavily in many of the trailers and even in the promotional material for the video game! Naturally, I was pretty excited to put this together so let’s dive into it! The box and its contents are well presented, with the boxart showing what the models look like and all the play features while the contents is divided into 3 bags, 2 instruction booklets and a sticker sheet! As with all my LEGO reviews (and as was common practice in my childhood) Minifigures get built first and what a motley bunch they are. Emmet and Wyldstyle look spot on to their onscreen counterparts and are full of fun little details. Both feature reversible with Emmet switching from cocky to wailing in fear while Wyldstyle’s faces convey confidence and determination. Emmet even has the Piece of Resistance on his back! The three Robo-SWAT officers are all very similar but have their own unique elements to differentiate them. I like to refer to them as “The Stooges”. The first thing you build is this speed trap that has a deploying gimmick. It’s quick but adds a little more play value to the set as a whole. The Super Cycle starts off humbly, building up slowly and looking pretty much like one giant engine. Once you add the front wheel, things start to take shape. I will say that I found the front wheel’s connection to the main body to be rather flimsy but I’m some entrepreneuring builder could stabilise it. It’s when you add the orange elements that things start to pop! The orange really makes the Super Cycle stand out and adding various stickers give the feel of a haphazard construction. The rear wheel is a massive tracked wheel and the Technic elements really help pull off the look. Add on the exhausts and flames and this hot rod is ready to roll and it rolls really well!

This half of the set was a really fun build. It uses a lot of unique elements in new and fun ways to give the Super Cycle an immensely imaginative look. It’s every bit as iconic and awesome as the trailers made out!

The second half of the set is the Super Secret Police 4×4 and after the Super Cycle, I wasn’t expecting much but y’know what? I think I may like it more… The 4×4’s build is pretty much what you would expect. Typical vehicle building fare but it’s robust and chunky aesthic is somewhat pleasing to me. It’s a hefty beast of a vehicle and doesn’t feel fragile in the least. There’s a storage compartment in the back, the roof lifts off to allow you to put some Robo-SWAT drivers in there (with some jigging about, you could easily fit two in there). There’s the obligatory flick missiles that fold up from the underside of the truck and there’s just a ton of playability in this vehicle, probably more-so than the Super Cycle. The designers did a great job of designing a rough and tumble vehicle without making it into a box and thanks to it’s chunky rubber tires, it rolls extremely well. So much so that I’ve found myself picking it up and just rolling it across my desk. Overall, 70808 Super Cycle Chase is an immensely satisfying LEGO set. It’s an iconic scene of the movie, expertly executed in plastic that offers a lot of playability and bang for your buck. It’s a robust release that is totally worth the £44.99 price tag and I would highly recommend picking it up. It’ll easily fit in with the rest of the LEGO Movie toys that are out right now and are coming up in the following months. If you liked this review (or even if you loved the movie) be sure to leave a comment below and I’ll catch you guys next time for another Mint in Box! Get me off this crazy thing!