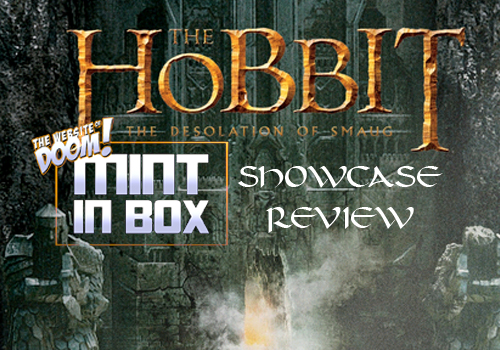 Mint in Box – The Hobbit: The Desolation of Smaug Showcase

Oh my Smaug, we’re back agaaaaain!
Greetings, fair travellers of Mordor to a showcase of figures from Vivid’s The Hobbit: The Desolation of Smaug toyline! We have an assortment of figures from the 3.75″ scale. Each of these figures boast to be highly detailed and feature up to 12 points of articulation. Let’s take a look! From the single figure line we have Azog, Gandalf the Grey and Radagast the Brown. Radagast is true to his onscreen counterpart, even bearing a pretty good likeness to the 7th Doctor, and friend of DOOM, Sylvester McCoy. The figure is highly detailed and I’ll appluad that, despite the primary colour being brown, the figure features some ornate detailing on the waistcoat and even includes the streak of bird poop that stains his matted hair. His articulation suffers due to his robe and beard so the only parts to make good use of the swivel joints are the arms, moving a the shoulders, elbows and wrist. Not bad. Gandalf the Grey is a hold over from the previous An Unexpected Journey line (more on that later) and features his staff, sword and hat. Unlike his Brown bretheren, Gandalf is less hindered by his sculpt, allowing for the waist turn to be used but like last time, his legs don’t see much action under the stiff robe. McKellen’s likeness is not as good as McCoy’s but it’s pretty close! His robe has a nice woven texture to it which lends him a little more authenticity. Again, not too shabby. Azog is probably my favourite out of the three single figures but again, he share some of the same limitations as the other two. His hips are hindered but at least his waist and knees are freed up to allow for some more interesting poses. His head, despite being on ball joint, is severely limited, only allowing for a limited degree of turning before the angles get unnatural. The sculpt is fantastic, with lots of detail and an amazing wash put over the flesh to give the white orc his pasty hue. His iron claw gets a nice metallic finish and his accesory is some kind of bone morning star, which is pretty cool. Definitely my favourite out of the bunch. Next up, we head into the arena of two-packs and this is where I lose a little bit of my objectivity. But I’m still not quite ready for a tirade just yet. I’ll get there… This two-pack features the funny duo of Bilbo and Gollum. I really enjoyed their interactions in the movie and I look forward to what they do with them in the next movie, if he even appears (I never read the book). This is a natural two-pack to do as they’re two of the biggest, well-known, characters of the franchise so you get Bilbo with Sting and a backpack and Gollum with… a pair of binoculars? I honestly don’t know what his accessory is supposed to be. Anyway, Gollum is a great sculpt and in a shocking turn of events, includes an abdomen crunch! Not even Azog got one of those but it helps Gollum hunch over as he is one to do. Bilbo is okay, he has the most freely accessible joints of all the figures so far, actually being able to use all of the advertised 12 points of articulation. Overall a really fun two-pack that HAS ALREADY COME OUT JUST OVER A YEAR AGO. That’s right, folks. This two-pack appeared in the Unexpected Journey line as well. With no changes. Infact, ALL of the advertised two-packs are holdovers from the previous line! Even most of the single figures are repacks of first movie figures (only Azog and Radagast are new). I realise Hasbro has pulled this kind of stunt for years (repacking older figures in new waves) but to blatantly do it with an entire line just over a year after the first line died is despicable. So do I recommend the figures?

Surprisingly, yes, but only because I know for a fact that you can pick up most of these figures in discount retailers like Home Bargains for £2-£4 for singles figures and two-packs. If you need Azog and Radagast, pick them up at regular retail but because these will probably end up at discount retailers within six months too, I would recommend waiting.
It’s just a shame this experience has tainted my like of these toys because they’re not all bad, some a very good in fact. Azog is a very fine figure and even the Bilbo/Gollum two-pack has its charm.