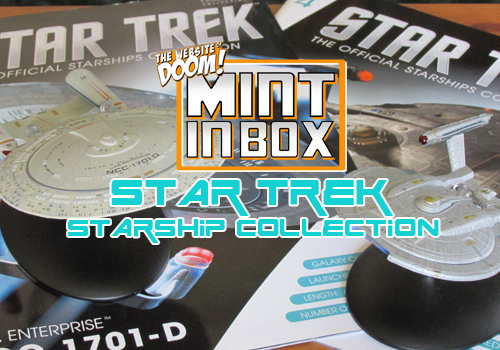 Boldly going… Six months behind schedule…
Star Trek: The Official Starships Collection is a British partwork magazine produced by Eaglemoss Collections and is published in a number of countries worldwide. Each fortnightly issue includes a twelve to fourteen centimeter-long scaled replica of a starship from the Star Trek universe, made from a combination of die cast metal and ABS plastic. Each accompanying magazine has twenty pages and features articles about the design, filming, and on-screen appearances of the original studio model. Detailed “in-universe” information about the vessel’s crew, weapons, and technology is also included. An online version of each magazine is also made available to subscribers. Today, I have the first issue (USS Enterprise D) and the 4th (NX-01 Enterprise) and the magazines certainly do feature a lot of information, and if you’re not too fussed about the “in-universe” stuff, you can take a look at the behind the scenes and conceptual design work which is much more to my taste. I love to look at concept work for television, games and movies and this scratches that itch for me. But the real headline act are the models and they are just as good as you’d expect. They may be small but each model features tons of detail and barring the odd QC issue, they’d look good on most Trek fan’s shelf! The Enterprise I grew up with is The Next Generation‘s Enterprise-D and it’s the perfectly place to start this collection. The details are damn near perfect and I love that the warp nacelles are translucent plastic so when the light hits them, they give off a glow. The Enterprise from the much maligned Enterprise is pretty dull compared to the D. It’s basically an upside down Akira-class (a MUCH cooler ship that I wish I had received) in gun metal grey. Bleh. Add to that the weak glue on the nacelles that caused them to fall off at the slightest touch, and this is definitely the weaker of the two I was sent to review. Overall, looking at the model quality, the variety of the ships available and the info included in the magazines I do have to recommend this collection to fans of Star Trek. Thanks to Eaglemoss for taking their time to send me something to review and you can find out how to subscribe (and earn some kick-ass free gifts) to this collection through their website.