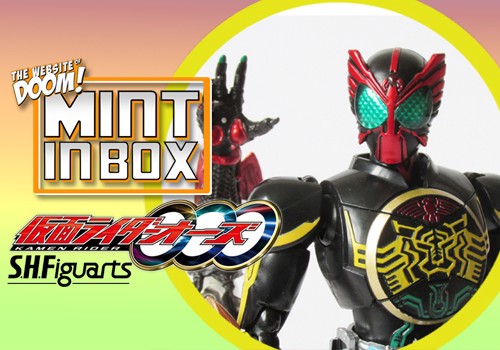 The Rider Figuart reviews continue here on Mint in Box with the man who fights to save humanity from their own greed: Kamen Rider OOO!
Eiji Hino is, for intents and purposes, a hobo who has no place to call home and a tragic past. When the coin-based homunculi known as the Greeed awaken after their 800-year slumber to attack humans and feed off of their desires, the disembodied arm of the Greeed named Ankh gives Eiji a belt and three Medals to fight the other Greeed as Kamen Rider OOO (pronounced Ohz). It’s a well liked show with the gayest double-act in Rider history and some of the catchiest music and henshin call-outs. Coming from 2011, this S.H. Figuarts release has a rather standard box layout but is accented by the colours and aesthetic of OOO himself. Not much to say about it but it certainly looks pretty! OOO comes with a fair amount of accessories, namely six pairs of interchangeable hands plus another for holding the included O Scanner, a set of extended Tora Claws and the Medajalibur. Taka! Tora! Batta! Ta–To–Ba! TaToBa, TaToBa! OOO’s base form really highlights the show’s gimmick well, namely the modular nature of the Rider form. At a distance, this looks like a fantastic figure, especially the Caribbean colour scheme, but it’s once you get it in hand that things quickly go south. Multiple botched paint applications plus no friction in the majority of the joints results in quite the let-down. Yes, the figure is amazingly detailed, the OOO Driver especially looks fantastic, but the paint work is sloppy at best and the joints, especially in the thighs on my copy, are some of the loosest I’ve ever had on a Figuart and that’s very disappointing. Despite the articulation problems, you can tweak and balance OOO into the semblance of a decent pose if you try hard enough. The hand-swapping is perilous thanks to the limpness of the wrist joints but the Tora Claws swap out easy enough and you can get some decent poses out of those too. OOO’s Medajalibur weapon, a birthday present from the Kougami Foundation, is rendered perfectly in the Figuarts scale and the hilt is long enough to be held two-handed by OOO should the mood strike you. It’s just a shame that the wrist joints don’t move significantly to allow for a wide range of poses. I chose to buy the OOO release that comes with the First Run Bonus of Ankh. Not off to a great start when they misspell the character’s name on both the packaging and the Tamashii stage… Regardless, Ankh’s mono-armed form is spot on and perfectly scaled to interact with OOO. I believe there are additional hands for this “figure” but are included in some add-on set I have no interest in buying. Overall, Kamen Rider OOO is a disappointment. There’s the makings of a great figure here but the multiple problems let it down a lot. Not quite buyer’s remorse territory because I’m super happy to have him amongst my Rider display but he’s definitely not my favourite Figuart purchase to date. Stick around though because we’re not quite done with Kamen Riders just yet as we delve into the realm of magic next time on Mint in Box!