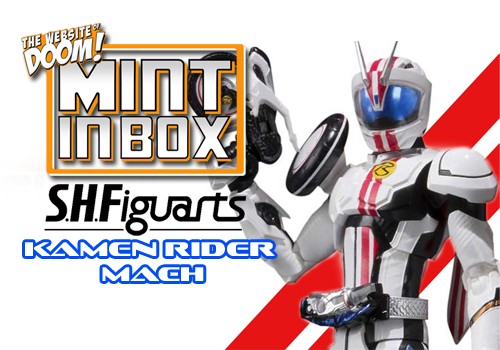 Photographing… Reviewing… Both done at Mach Speed! Here’s my review of Kamen Riderrrrrr MAH-HAAAAAA~!
Go Shijima is the secondary Rider for Kamen Rider Drive and, bizarrely, this Rider is a RIDER! While Drive’s motif may be car-themed, Mach bucks that trend by being the most Evel Knievel-looking Rider this side of the Nippon. He’s arrogant, flamboyant and has a real boner for destroying Roidmudes, even when they’re allies. I don’t like Go as a character but I can’t help but love all that flare when it’s coming out of the suit rather than Go’s smug face. Just like Drive before him, Mach is presented in a rather stylish matte black box that’s much thinner than previous S.H. Figuarts releases. Unlike Drive however, Mach packs a ton of goodies into this slender package! Included in the standard release are five paris of interchangeable hands, two interchangeable scarves, the Zenrin Shooter – Mach’s signature weapon, and the Margarl Signal Bike and Signal Koukan plate. A big step up from Drive right out of the box. Kamen Rider Mach is just gorgeous. His matte white makes all the other paint details pop even more. Every application is fine and crisp and the palette is spot-on to his onscreen counterpart. The details of the figure are even up to the S.H. Figuarts standard. The Mach Driver Honoh has great silver paint apps and even has a functioning chamber for Signal Koukan goodness! Articulation wise, he’s much the same as Drive but with the added hand count, you can pull off some really expressive poses, which suits the character to a T. The Zenrin Shooter (Front Wheel Shooter) can be held in either hand and is nicely detailed and is one solid piece. I’m sure someone would’ve liked the wheel to spin freely but that person is crazy. I might have liked some blast effect parts but considering the playability here, I can live without it. For the Signal Koukan parts, the change between the default load out and the included Margarl parts is pretty simple but due to the small parts involved, it can be fiddly. Still, it’s pulled off well and you’ll have Mach pulling of bending shots in no time! Next to his partner in crime-fighting, Mach looks fantastic! The balance of colour and contrasting vehicular themes make them quite a pair to own. And as I race to the finish of this review, I’d be remiss if I didn’t mention one of Mach’s most interesting features, executed perfectly in Figuarts form – the V-Helm. Since Mach is clearly based on a motorcycle racer, his visor lifts, allowing Mach to vent excess energy from his faceguard. It looks so cool in motion and I’m happy they included it on the figure. Overall, Mach is highly recommended! Even more-so than Drive even because Mach beats him in nearly every way in my eyes. He looks better, he has more accessories and his design is more conducive to pulling fun poses. But Drive isn’t completely shafted by Mach because he was nice enough to bring a present. The First Run Bonus that comes with Kamen Rider Mach is the Funky Spike tire for Drive. While nothing outlandish cool, it’s one of the series’ mainstays and part of Drive’s default loadout. TIRE KOUKAN! FUNKY SPIKE! The tire lives up to it’s name by being a fantastic metallic green but also really spiky so watch your fingers. It’s not my favourite tire but it’s still nice to have it. Again, Kamen Rider Mach is a must-buy, both as a stand-alone figure and as part of Kamen Rider Drive’s trio of heroic Riders!