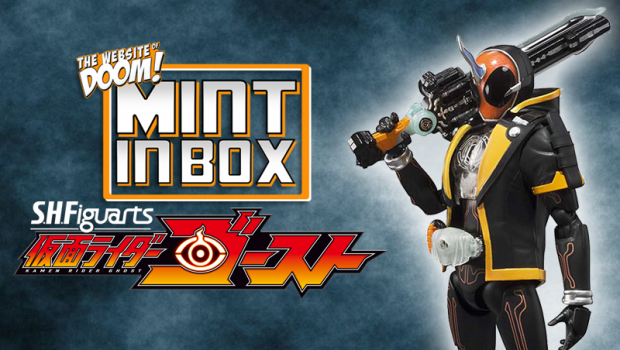 Who Ya Gonna Call?

Hi guys, Sharp-O back once again with another Mint in Box and today we’re looking at the S.H. Figuarts release of Takeru Tenkuji, the man whose life shines bright: Kamen Rider Ghost Ore Damashii! Ghost continues the Figuarts line’s shift to a more stream-line package format and as I’ve said previously, I love this as it’s more ergonomic and saves space for collectors who keep the packaging like me. Inside the packaging you find the figure itself, an extra hood piece, three pairs of interchangeable hands and the Gan Gun Saber. Also included within this release is Yurusen, the Ankh-like ghostly assistant to Takeru but without the charming anger issues and floofy hair. He comes in one piece, features a head-swivel and has a stand to help him float around Takeru. Ore Damashii form, translates to ‘My Soul’ and basically means Takeru’s wearing a jacket made of HIS OWN SOUL and it looks fantastic! The slick black with orange highlights is totally my jam and his short sleeved hooded soul-jacket makes him look like a right brawler.

The spirit-hoodie, while looking amazing, is made of a hard rubber that severely hinders the poseability of the upper torso and, to a lesser extent, the shoulders and upper arms which is pretty disappointing. The Ghost Driver is realised very nice though the handle doesn’t move but it does include a removable faceplate so you can see that monstrous cyclops face that the real Driver has so that’s a nice touch. I’m a little disappointed in Ghost Ore Damashii because while it’s a great looking figure, it’s mired by the same adherence to the suit design that makes it look great but, regardless of that fact, I do kinda recommend picking this guy up because the unpopularity of the Ghost series itself (and it’s baaaad) means that the Figuarts are pretty cheap and I’d say this guy is worth 24 quid of any Kamen Rider fans money just because of how he looks next to his compatriots. As always, I’ve been Sharp-O, this has been the SH Figuarts Kamen Rider Ghost Ore Damashii and my life will burn bright on the next Mint in Box!