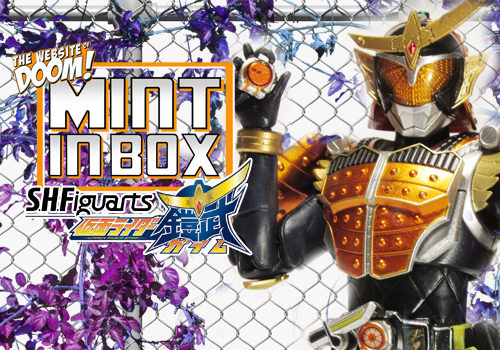 The citrus defender of Zawame City takes to the stage!
I’m sure you guys are getting tired of me covering Kamen Rider Gaim but I couldn’t stop until I covered the S.H. Figuarts offerings for the show! Kouta Kazuraba is the titular Kamen Rider Gaim and his base form utilises the Orange Lockseed. One thing I love about the packaging for this figure is that the window motif mimics the given fruit theme of the Rider, in this case, having a segmented orange pattern while the back has a very ornate, Japanese theme to it. The tray inside houses five pairs of interchangeable hands, a closed Orange Lockseed, a Musous Saber and Orange Arms’ signature weapon, the Daidaimaru. Kamen Rider Gaim is my favourite S.H. Figuarts release to date, and that just by messing with him straight out of the packaging. This is a brand new style of figure with a fantastic detailing, gorgeous paint and some new quirks to the articulation. His hips are more akin to Marvel Legends and the posts for his interchangeable hands are smaller yet feel much sturdier. Unfortunately, the holster for his Musou Saber isn’t as sturdy and is prone to popping off the belt. Accessories-wise, I better talk about the smallest first with the Orange Lockseed. Gaim’s ‘open’ hands can hold it comfortably with a little coercing or it can be stored on the Lockseed holster on his right side. There’s an open version on his Sengoku Driver, which features tons of detail and chopping action with the knife, allowing you to replicate actions from the show. The Musou Saber is the standard side-arm weapon for a quartet of Riders on the show and has some great paint apps. It’s a combination sword/pistol, much like the Ixa Calibur from Kamen Rider Kiva. The Daidaimaru is the signature weapon for Orange Arms, looking like a segmented orange slice as a blade. You can combine the Musou Saber and Daidaimaru into its Naginata Mode by plugging one into the hilt of the other. This combined weapon can be further added to by plugging the Orange Lockseed into the blade’s cross guard. Compared to the Arms Change line, the S.H. Figuarts release is a gorgeus delight which is superior in all but one way, the AC gimmick. Yup, no swapping armours between figures but you know what? I can live without it when they look THIS good! As a whole, I LOVE Kamen Rider Gaim and having a Figuarts this gorgeous and this poseable is the cherry on the cake and this release gets a massive recommendation!