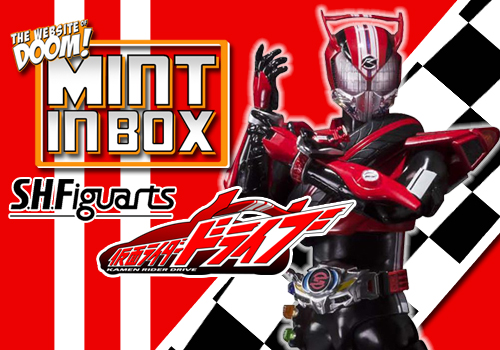 START YOUR ENGINE! with my comprehensive review of Kamen Rider Drive’s first outing into the S.H. Figuarts line!

Shinnosuke Tomari is a former elite police officer in the Metropolitan Police, who, after an event that traumatized one of his colleagues, has been “demoted” into the Special Investigations Division. This division looks into the stranger happenings in the city, particularly the recent “Heavy Acceleration” events. These events, termed “Slowdown” by the public, leave people unable to move. When he is chosen by the Drive Driver and Tridoron, Shinnosuke transforms into Kamen Rider Drive and is tasked with battling the Roidmudes who plan to rise against humanity and take over the world. While the main Type Speed release is a little lacking in accessories, the First Run Bonus parts more than make up for this deficit.