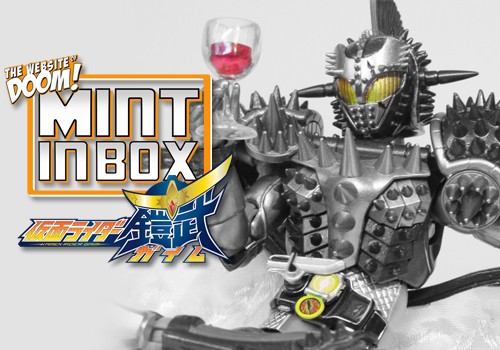 Elegance. Opulence. Violence. Give it up for Mister Dangerous!

Mint in Box revisits Zawame City for a bite of this delectable forbidden fruit! Oren Pierre Alfonzo is one of the many Armoured Riders who star in Kamen Rider Gaim but unlike many others, this effeminate man mountain has no ties to the Invess game; in fact, he hates it. A former soldier turned pastry shop owner, Oren demands the very best in every field and this leads him to clash swords with the young Beat Riders using the Durian lockseed and becoming Kamen Rider Bravo! Kamen Rider Bravo was a Tamashii Web Exclusive, befitting of a man who is to extravagance what Mitsuzane is to betrayal, meaning he’s a little tougher to find and demands a high price on the secondary market (but not as much as Gaim’s secondary Rider oddly…). This premium feel extends to his box which, while stylistically similar to Gaim’s, foregoes the window box for a glossy photo image. His packaging even comes in a custom brown box for extra protection! Mister Dangerous is damned impressive right out of the packaging. Four pairs of interchangeable hands, a special holding hand, a closed Durian lockseed, his signature Duri Noko chain swords and, to top it all off, a tiny wine glass! Truly, a man of exceptional accessories. The figure itself builds on the already amazing frame that Gaim had but casts it in rich metallic greens, purples and silver. The paint is astounding as usual but if there’s a downside, it’s the plain green joints that stand out against the metallic lime-green of Bravo’s limbs. It’s a very minor nit-pick on an otherwise astonishing visual treat! (And yes, he’s missing a back spike from his right pauldron. I did buy him third-hand.) Bravo’s accessories give him a wealth of personality, which is perfect for the larger than life Oren. As a natural showman and a fair maiden at heart, his hands and articulation allow you to make the figure excessively expressive. Whether it’s the shy demeanour reserved for his beloved Melon (Kamen Rider Zangetsu), the showmanship of a gladiator or even the distinguished mannerisms of a renaissance man; Bravo will look fantastic no matter how you pose him. His tiny lockseed is just as minuscule as Gaim’s and will never leave the packaging again after this review. His wine glass on the other hand will see lots of play because just look at him! He exudes class and respect despite the inherent stupidity of trying to drink wine through a helmet! Size-wise, it feels like Bravo is a little smaller than Gaim and that’s just wrong, not only because their respective actors are on opposite ends of the height scale but because Bravo should feel like a bigger figure. He should be a brute! Until it’s time to sexually harass the others — then the size would only make the kabe-don even better! Finally; we come to the Duri Noko, Bravo’s signature twin chain swords. They’re cool enough and certainly fit with his aesthetic but are ultimately just props. It’s a shame they don’t connect into one weapon like the show and like Gaim’s naginata weapon mode. Overall, I love having Bravo in my collection. He’s a fantastic character and all that awesome translates to his toy well! If you can put up with the minor colour discrepancies on his joints and your fingers feeling like you’ve pleasured a porcupine after prolonged posing — Pick him up! I can guarantee you will not be disappointed!