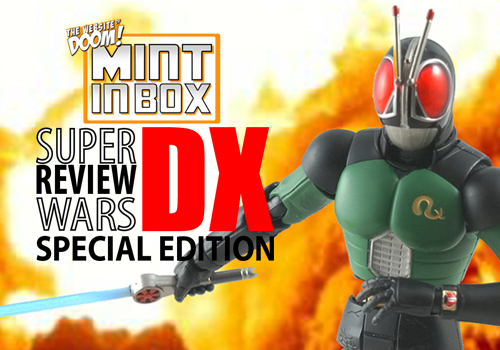 The Super Review Wars DX has begun and CollectionDX shall rain death upon you! Or reviews. Or just this one.

So yeah, here we have S.H. Figuarts Kamen Rider Black RX! For those of you who are more familiar with Saban’s 1990’s offerings, this was the Masked RiDER, the heroic prince Dex from the planet Edenoi! Praise Ferbus, this packaging is fantastic. I love all the nice details here. Out of the package, you can see that there is a WHOLE lot of great detail here, from the paint to the sculpt. There are also some gorgeous compound eyes on the head. I also love how the toy has details the suit did, like wrinkles and zippers. It just makes it feel way more intense. Speaking of intense, check out the articulation on this little fella.

He has double ball-jointed everything forever. If it should be possible to put a human into a pose, then this figure can do it. It’s just spectacular. The Masked Rider also comes with all the accessories he could ever need, including six pairs of hands! He has fists, holding-things hands, posing hands, utility hands, splayed hands, and KARATE CHOP hands. He also comes with 2 versions of his Revolcane (or Electro Sabre, praise Ferbus). One version is metal-colored and the other is an opaque blue. That way you can mix and match the hilt and blades to create every possible scenario for slicing fools. He also comes with an extra belt that the blue hilt attaches to so you can replicate whipping it out in public. Just look at this, man. I love this figure. If you’re a huge Kamen Rider or Saban’s Masked Rider fan (praise Ferbus), then you owe it to yourself to pick one of these up!

Also, please check out www.collectiondx.com and see where I normally post my reviews!

Until next time, mortals.