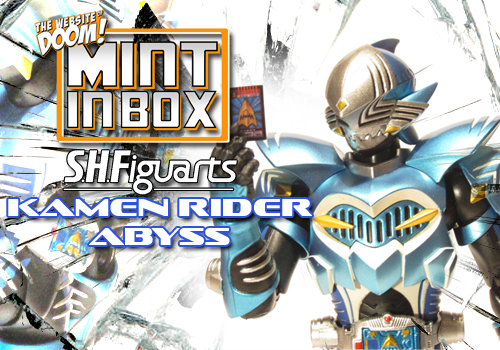 Just when you thought it was safe to Journey through the Decade.
The mysterious Kamen Rider Abyss is an exclusive Rider to the series Kamen Rider Decade, a Sliders-style celebration of the Kamen Rider franchise. Abyss appears on Ryuki’s World as an ally-turned-antagonist to frame one of our heroes for murder. In a bizarre twist, he’s revealed to be the Paradoxa Undead monster from Blade’s World. The packaging for this S.H. Figuarts release harkens back to older figures, with a more basic package but the reverse is undeniably a Ryuki design, with the shattered mirror motif and bold text declaring “ADVENT”. The inside tray has a ton of accessories! Along with FIVE pairs of interchangeable hands, you get a card-holding right hand, the Abyss Visor, Strike Vent, the twin Sword Vent, and his four TEENY-TINY Advent cards. Also included is an awesome Tamashii stage with his logo and name printed on it. The Advent cards (L-R: Final Vent, Sword Vent, Advent and Strike Vent) are incredibly small, only a few millimetres in size but feature very detail printing and I’m going to keep them in their designated baggy because you could lose these as easily as you could lose Kyoryu Red’s beast battery. Interestingly, his Advent deck is removable from his belt but cannot store cards. Out of the package and equipped with his Abyss Visor, Kamen Rider Abyss looks astounding! His shark motif is cast in a gorgeous metallic blue. One nice thing I like is that unlike the plain black legs that most Ryuki Riders have, Abyss adds lots of colourful details to the undersuit. Like older KR Figuarts, Abyss has die-cast feet, helping posing options and giving some much needed heft, especially considering that Abyss is pretty short compared to other Figuarts I have. He’s a right shorty shark. Sliding Advent cards into their Visors, Ryuki Riders can access the weapons and abilities associated with their Contract Beasts and Abyss is no different. His visor opens and has room for a card to be placed. Sword Vent calls forth one or two Abyss Sabers, which are awesome serrated blades that look as mean as you’d expect a shark man to use. Kamen Rider Abyss is a fantastic design that I’ve always wanted a figure of and having him in hand, I can happily report that I’m pretty chuffed. He might be small but he’s got tons of personality and I welcome him into my S.H. Figuarts collection. Some might not be as happy by his arrival in Sharp-O’s World…