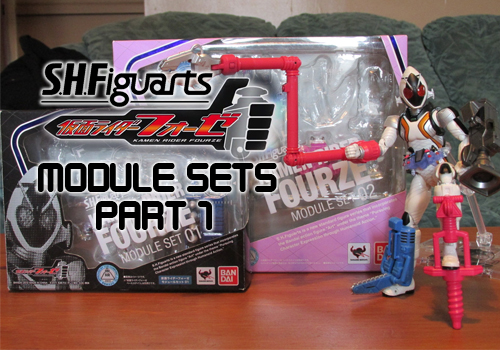 I said I wasn’t done with Kamen Rider Fourze just yet and thanks to a HobbyLink Japan payload, I’ll be showcasing many of Fourze’s weapons and tools in his fight against the Zodiarts, all rendered in scale with S.H. Figuarts Fourze! Today, we’ll be embracing the gimmick of our youth and be looking at Modules Sets 01 and 02. All the modules mostly attach and remove in the same way as the ones included in the Base States release. Module Set 01 fills out Fourze’s default astro switch loadout as well as add some new toys to the arsenal. Just like Fourze, these Module sets also include tiny little astro switches to add accuracy to Fourze’s belt while swapping modules and while that’s considerate of the designers, it’s an absolute ball ache to keep track of. I even lost a couple while taking photos, causing me 20 minutes of frantic searching for millimetre small transluscent plastic pieces! Radar allows Fourze communication with his allies as well as used to detect enemies and lock onto them for a homing missle attack. The dish pivots on a hinge and the screen on the forearm is picked out with grey paint. Might have been nice for a little read out but it’s good enough. Launcher is the final astro switch for Fourze’s default belt configuration, adding a massive missile battery to Fourze’s right leg. The missiles are removable but aren’t spring-loaded so they’re either just there or not. When Launcher is used with Radar, Fourze can execute a precise missile bombardment! Magic Hand is similar to an SRMS (Shuttle Remote Manipulator System) used on space shuttles. This manipulator arm is highly articulated, with hinges and swivels all along its length, and can move in many different directions as well as open the claw at the end but this module is very heavy, causing strain on my particular figure so I recommend using a tamashii stage. Lastly for Set 01 we have Camera. I can only think of one situation where this module was used in combat but I love how ludicrous it looks. This big VHS video camera attached to the arm of our hero is one of the sillier, but equally awesome, modules we’ll be looking at. The view finder is articulated to allow you to pose with Fourze’s head.

I think this set is a must-have if you’re a Fourze fan, since it includes the other two default switches as well as two iconic modules. Module Set 02 is not to be outdone either, being bigger and boasting more bang for your buck! Unlike the Base States release and Module Set 01, this release DOES come with tamashii stage, emblazoned with the Kamen Rider Club logo! I love it but if that isn’t good enough, it also includes several more pieces to increase the size of the included armature for a very special reason! Parachute is by far the largest module of any set! It’s connected to Fourze’s left arm and you have to plug a bunch of strands into the plastic canopy. The stage extends upwards to allow for this module to be deployed fully and while it looks very impressive, I don’t thing it’ll be getting much play on my shelf because of the space needed. Very fun though! Chainsaw is a BONA FIDE CHAINSAW LEG! That’s awesome, no matter where you come from! This is the highlight of the set by far, featuring a fold down blade but you can also swap that, as well as the foot, for a more screen accurate look. This module is certainly a cut above the rest! Hopping is another of the many silly modules that seem useless but end up providing some advantage. Unfortunately, this is a solid plastic piece with no spring gimmick at all, much to my disappointment. You can still get some funny pose out of it though! We skip ahead to Module 14, since Modules 10, 11, and 12 are included in the Elek States release and 13 will be seen next time so here is Smoke! Smoke is another useless lump with no moving parts or real charm. In the show it would emit a smokescreen and I think being included with the massive Parachute made extras for Smoke and Hopping harder to justify, hence their rather anemic standard.

I think Module Set 02 is a harder sell and while I’m glad I have it, I got it for around £2 in HLJ’s clearance sale.

Both of these sets are great releases and while 02 might be harder to justify paying full price for, I’m sure you’ll be able to bag yourselves a bargain at this juncture! Keep your eyes in the sky because I’ll be back soon with more from our space-bound hero!