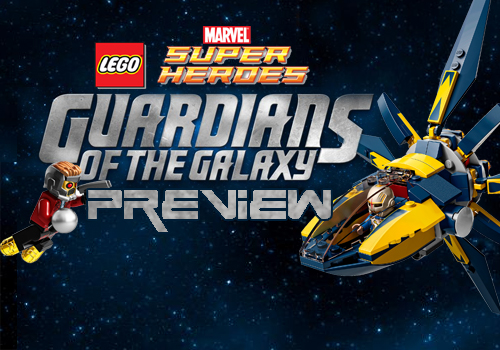 Mint in Box Preview! – LEGO Guardians of The Galaxy!

It’s fair to say that I’m excited for Guardians of The Galaxy, it’s also fair to say that we love LEGO here on The Website of Doom. You see where I’m going with this? Course you do, you read the title! LEGO have been kind enough to send us a press release for three of the brand new sets themed around the upcoming movie! Let’s take a gander at these out of this world sets! Launch into battle against the Sakaaran’s Necrocraft in the awesome Starblaster and help Star-Lord to escape with the orb! Place the Nova officer in the cockpit and launch into the sky. Fold back the wings for high-speed pursuit mode and then flip them up to activate arrest mode. Use the space blasters and boot thrusters of Star-Lord to outwit the enemy and protect the priceless orb! Includes 3 minifigures with assorted weapons and accessories: Star-Lord, the Sakaaran and a Nova officer. They’ve discovered the rare orb in the mining fields, only to be ambushed by the bad guys. Evade shots from the huge bazooka assembled by the Sakaaran and the evil Nebula and return fire with Rocket Raccoon’s custom space blaster. Leap into action with the gigantic posable Groot to confront the sword-wielding Nebula. Launch a fierce counter-attack so Rocket Raccoon can get away in the mining pod with the precious orb in its grabbing claw! Includes 3 minifigures with assorted weapons: Rocket Raccoon, Nebula and the Sakaaran, plus Groot figure. Prepare for an epic clash between the Guardians of the Galaxy and the ultimate villain, Ronan! Ronan zooms into this epic deep-space battle in his personal Necrocraft, backed up by the Sakaaran, and holding his all-powerful Cosmi-Rod ready to strike. Luckily, Star-Lord is prepared to launch a counter-attack with the equally potent Hadron Enforcer and 2 iconic space blasters. Steer the mighty Milano Spaceship into battle with Gamora and Drax, firing the stud shooters and flick missiles to repel this evil threat to the Galaxy. Includes 5 minifigures with assorted weapons and accessories: Star-Lord, Gamora, Drax, Ronan and the Sakaaran.

Man, these sets are ASTOUNDING! It’s mind-blowing enough to be getting a movie of my favourite Marvel super-team but to also have them in LEGO form? Is it Secret Sharp-O Christmas, because it feels like it!

I can’t speak to how mainstream these will be, given that the mainstreamers I know respond to Guardians with a collective “Wot?” but for the Marvel fans, the LEGO fans and just fans both young and old, I think these will do well. I mean, who doesn’t want another Chris Pratt Minifigure?

All of these sets are available RIGHT NOW from all good retailers and from LEGO.com!