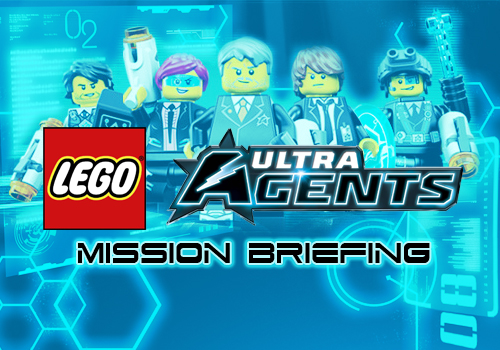 A new criminal force threatens to wreak havoc in Astor City! Download the free LEGO® Ultra Agents app, accomplish challenging and interactive missions online and even create your own Ultra Agent avatar. Become an Ultra Agent and save Astor City! With every victory and mission completed, the player will get closer to discovering the evil puppet master behind the Super Villains’, as well as alternative building instructions to rebuild one of their existing agent models. These instructions are also available as a PDF file that can be downloaded from LEGO.com and saved onto your device for later use!

Now pay close attention, Ultra Agent. These will be your allies, your enemies and the vehicles at your disposal! Urgent call for rookie Ultra Agent Max Burns! Adam Acid is trying to steal crates of toxic compounds from the Astor City docks for his Super Villain master, Toxikita. Thwart the Riverside Raid by using the quad bike and jet speeder and firing the stud shooters. Attach the rear winch to pull back the jet speeder and locate the missing crates and place them in a safe area. Includes two minifigures with weapons: Agent Max Burns and Adam Acid. Attention Ultra Agent Jack Fury! Tremor, the iron-fisted Super Villain, is rampaging through the streets of Astor City in his fearsome armoured track vehicle. Your vital mission is to protect the ultra chip which contains all the Ultra Agents’ secret plans. Stay clear of the vehicle’s massive power punching fists and fend off the flick missiles with the shield. Use all your skills to outsmart this heavily-armoured Super Villain. But watch out! Just one mighty punch from Tremor’s vehicle will explode the mainframe database and release the precious ultra chip! Includes two minifigures with weapons and accessories: Tremor and Agent Jack Fury! Calling Ultra Agent Solomon Blaze! Infearno is flying high above Astor City on his flame-powered hover board. The Super Villain is wearing a flamethrower suit and dropping sticks of dynamite, spreading fear among the citizens. Set off in hot pursuit in Agent Solomon’s awesome convertible car withy protective translucent blue energy panels. Fold the wheels for hover mode and launch into a mid-air battle! If Infearno’s attacks get too hot to handle, activate the super-cool ejector seat function to evade the super-hot flames! Includes two minifigures with assorted weapons and accessories: Infearno and Agent Solomon Blaze. Report for duty Ultra Agent Curtis Bolt! Villainess Toxikita has discovered the top-secret lab at Pointer Island and is dropping toxic bombs from her helicopter, piloted by her henchman, Retox. Inside the lab, the Astor City Scientist has been carrying out experiments using the remote-control safety claws. Protect him and guard the crystal – it can cause extreme damage in the wrong hands! Watch out for that sneaky Toxikita as she swoops down from the helicopter on the chain and tries to steal the crystal to power up her secret weapon! Intercept her before she causes a complete metropolis meltdown! Includes four minifigures with assorted weapons and accessories: Toxikita, Retox, Agent Curtis Bolt and Astor City Scientist. Red alert, Ultra Agents! Team up to defeat wind-powered Super Villain Psyclone who is whipping up storms and wreaking havoc across Astor City! Psyclone’s awesome transforming flyer is equipped with giant spinning rotor blades to whip up whirling tornados. Defeat him with Agent Caila Phoenix’s futuristic motorbike with its twin stud shooters and double the aerial attack with Agent Jack Fury and his jetpack and plasma cannon! Look out! This Super Villain is on a mission to create a whirling tornado and suck up all the money, so move fast to protect Astor City’s assets and its citizens! Includes four minifigures with weapons and accessories: Psyclone, Astor City Guard, Agent Caila Phoenix and Agent Jack Fury. Emergency! Evil cybernetic hacker Terabyte is attacking the Ultra Agents’ mobile Mission HQ on a mission to disable Astor City’s entire communication network. Drive the high-tech truck in undercover mode and fire the automatic missile shooters to fend him off. Push the lever to detach the driver’s cabin and open up the rear of the truck to reveal the inside of the awesome HQ. Stop Terabyte escaping with the laptop containing all the Ultra Agents’ secret files by launching the buggy down the ramp and fire the stud shooters to defend the Ultra Agents HQ. Includes five minifigures with accessories: Terabyte, Agent Solomon Blaze, Agent Caila Phoenix, Agent Curtis Bolt and Professor Christina Hydron.

Are you up to the challenge? LEGO Ultra Agents provides a fun new spy theme with vehicles that bring to mind M.A.S.K, minifigures reminiscent of Men in Black and some very characterful villains. The new Stud Blaster technology is also a very fun new play pattern. Between the sets and the app, any budding Ultra Agent is well equipped for the task of defending Astor City from the evil Super Villains! LEGO Ultra Agents are available now from all good toy stockits and from LEGO.com!