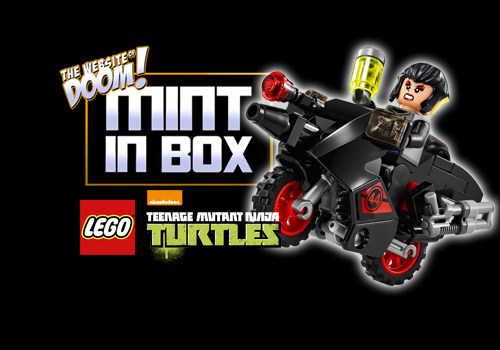 This is by far the smallest actual set I’ve reviewed, with two small bags, a sticker sheet and a bike shell for contents but as always, let’s get our minifig on! This set comes with Leonardo and Karai (Shredder’s granddaughter) and assorted stuff for them. Leonardo is much the same as previous sets but with a little more wear and tear, with multiple cuts and scratches on him. He comes with his signature katanas and a blue skateboard plus tether. Karai features her wacky hair style, some sweet tampographed armour, reversible head and a canister of mutagen, along with a black katana. The first thing you build in the set is the warning sign/ramp. Not much to say but it has a nice sticker for the warning stripes. Karai’s bike is a big part of the build but is actually quite simple since the shell does a lot of the work. Adding a front cannon, storage clip on the back and the double-exhaust (cleverly reused from a laser gun piece) and you end up with an incredibly slick motorcycle. Karai can ride it quite comfortably and Leo’s tether attaches to the side. The exploding news stand is easily my favourite part of this set and I know that sounds weird but hear me out! This is a quintessential part of the New York landscape, not only are the street signs accurate to a specific location but who doesn’t recognise the bright yellow newspaper dispensers and red fire hydrant of the Big Apple? This section could be used for so many little dioramas. ANYWAY, the build is relatively simple, incorporating the street sign’s see-saw gimmick to flick the dispenser apart. It’s a fun little build with tons of character. This set is a great entry level set to the line with two great minifigures, a slick motorcycle and cool news stand with a fun play feature. This set retails for around £11.99 and I heartily recommend it.