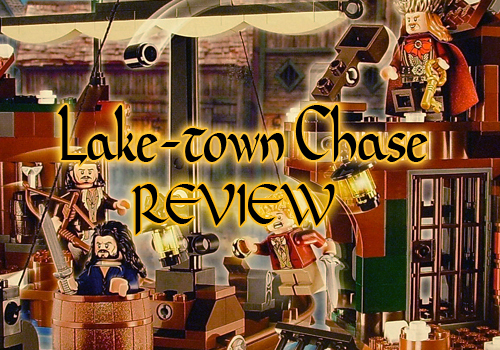 Far over the misty mountains cold, through dungeons deep and LEGO sets brown.

With The Hobbit: The Desolation of Smaug hitting theatres pretty soon, it’s only naturally that the toy lines are being rolled out just in time for Christmas. For the moment, I’ll be looking at LEGO’s offerings with their continuation of the Hobbit line into this movie with the Lake-town Chase set. Having never read the book, nor seen the movie yet, how about we let the blurb give us some context? Bilbo Baggins™ and Thorin Oakenshield™ have washed up on the shores of Lake-town. Help the heroic Bard the Bowman™ to sneak them in aboard his boat, hide in the barrel and sail into town. Sneak through the secret passageway into the armory to grab a weapon and tiptoe past the Guard to take the prison key. Blow out the prison wall for the ultimate distraction! Can our heroes avoid being blasted by the prison roof catapult and escape to safety? Includes 5 minifigures with assorted weapons and accessories: Bilbo Baggins™, Thorin Oakenshield™, Bard the Bowman™, Master of Lake-town and a Lake-town Guard.

So hey, a daring prison break under cover of darkness with a dashing rogue, though who they’re breaking out is up for debate since both Bilbo and Thorin are sneaking IN to the town but whatever, we’re not here to nitpick plot threads in a LEGO set! We’re here to review it so let’s set sail for adventure! 79013 Lake-town Chase retails for around £49.99 and boasts a 470 piece count. This boosts my building size from the previous LEGO set by a decent jump but first, MINIFIGURES! This set comes with five minifigures, each distinct and cool in their own right. Even the generic guard has a fun design. Four out of the five receive an alternate face printing that allows for extra play value in these minifigs, something I hope they keep doing in the future since having different emotions allows for kids to be more engaged. Each character gets their own unique weapon but there are still plenty to hand around in the main set itself so let’s dig into… A whole lot of brown! I’m not even kidding, every bag has large brown components to it and while that may not be very interesting, it gives the set a consistent feel. The first build is the boat and boy is it fun. It’s a very simplistic build in concept but by combining two regular boats with a little hidden connection, you end up with something reminiscent of a Viking long boat and a robust vehicle build that’s simple. Next up is the wooden armoury so lots more brown. The buildings are where the pieces really go as the building forms from a very solid foundation up. It’s not pretty but it does have a hidden passageway gimmick going for it, as well as storage for extra weapons. It’s nice that they break up the brown with dots of white (I assume it’s snow) and blue to represent the water. Throw in some earthy greens and you’ve got a well balanced and aesthetically pleasing second part. I neglected to mention earlier how this set comes in four bags, as well as the tiny piece bags inside each. The 3rd bag is the first half of the main building, a prison/gatehouse. The bulk of the prison portion is built on the same foundation as the armoury, and forms a solid base for the second half. One of the prison’s barred walls allows for it to be blown out from the inside out with a simple lever. The 4th bag builds on top of the prison and adds far more green into the mix and all the pieces tie together really well. Once complete it can feel a little small but when looking at it objectively, the building is very well constructed and has a very pleasing aesthetic. The interior of the upper building is a little sparse but includes some nice details and connects to an overlook that has a catapult. For saying this set only features 30 more pieces and costs £15 more than the Galaxy Squad set, you’d think I’d recommend waiting for it to drop in price and while I’m always in favour of getting a deal rather than pay full retail on anything, the Lake-town Chase surprised me in how much fun it was to build. It has a consistent aesthetic that fits with the Tolkein universe and has tons of play value, leaving you with a robust and entertaining LEGO set. This set, as well as the others in the Desolation of Smaug line, should be hitting stores as of time of writing but keep your eyes peeled to DOOM because I’m not quite done with this particular Hobbit quite yet…