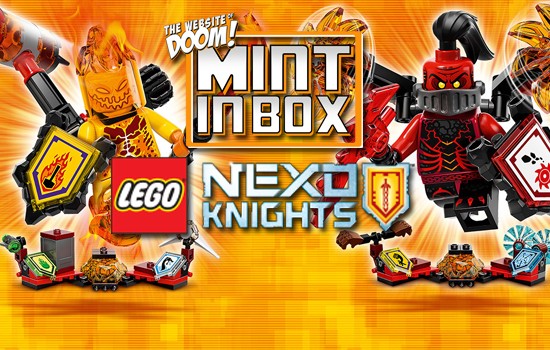 I’m in lava with these bad guys!

Ow! Owww! Why do you come here if you don’t like the puns?! Oh, right, toy reviews! Welcome back to more from the kingdom of Knighton as we take a look at more of the Ultimate offerings from LEGO Nexo Knights! Bring on the baddies! This second wave brings more of the lava monster army’s characters in the form of General Magmar and Flama! The packaging is the same as the previous waves and includes all the same kind of features for £6.99 a pop! General Magmar is the long suffering commander of the lava monster army. I have a lot of problems with his hair piece; it just refuses to stay in! His Ultimate set consists of two bags containing 64 pieces and an instruction booklet. Once built, this lava monster confirms that all the evil bases follow the same general build barring pieces for exclusive parts. His default NEXO power is Rock Ripper, which summons this mining rig for Magmar’s back. The spinning mechanism spins smoothly and adjusts for balance very well. The Mightiness NEXO power gives the not-so-good general a large duelling stick with fists on either end that can also be removed for when he really needs to punch something. The Whirlwind NEXO powers is described as a storm of axes but in reality, it’s just a pair of small fans. Smaller than the mining saws. That’s kind of disappointing considering the awesome description but hopefully the in-game power you can unlock is more impressive. Flama is the twin brother of Moltor; forming the Hot’n’Heavy twins. Can’t but feel someone should have taken a second pass at that name but who am I to judge what lava monsters do behind closed doors? Flama comes in a set with two bags of 67 assorted pieces and an instruction booklet. I really dig all the translucent parts on Flama, it makes the whole lava goop monster thing work. Good choice of parts, design team! Love the basic flame sword too! Flama’s default weapon is a flaming hammer on a tilting mechanism with the Flame Wreck NEXO power. I do like hammer rig but it makes Flama hard to balance and that’s pretty hard to begin with. We saw the Slime Blast NEXO power in the Rumble Blade review but here we get a stud blaster which looks odd enough in a world of tech-knight but especially weird with a villain made of magma. The Ice Dragon NEXO power is an odd choice of power up for a lava monster but it does come with this sick spiked weapon that I guess is a like a throwing stair or chakram? I dunno, it’s pretty weird but the cool kind of weird. The bad guys for this summer wave of Ultimate sets are pretty cool with a nice variety of weapons and scannable powers to use. Be sure to come back as we armour up with more LEGO Nexo Knights!