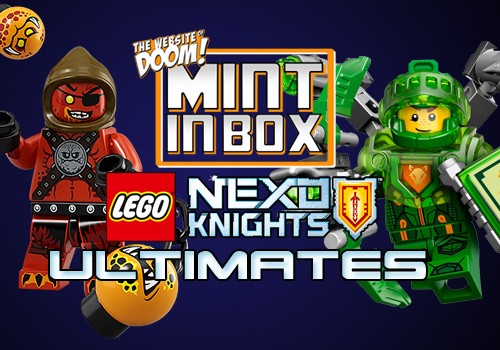 Hark! For this is the age of the Ultimates!

The NEXO Knights, as well as having rocking sets revolving around typical knightly themes of jousting, castles and bashing in monsters with a techno-magic twist, also have these entry level sets with ‘Ultimate’ versions of the NEXO Knights characters. We’ll be taking a look at two of those today so let’s armour up! The Ultimate booster sets are £6.99 each and feature one NEXO Knight character, three NEXO Power shields and assortment of related armour and weapons designed to augment the playability of the other sets. I like to think of them as the Minifigure-scale equivalent of the Bionicle character releases and definitely a cheaper alternative to buying full sets if you just want the NEXO Knights characters. Beast Master, judging by the media, is a pretty low-ranking goon whose only defining feature is that he wrangles the Globlins. This Ultimate set contains 65 pieces and one instruction booklet. Once built, Beast Master and his armour pieces are all contained on his own little themed stand which I really dig. It’s a neat storage solution and having multiple character will make a nice little display. Beast Master’s default loadout has a Globlin-swinging backpack, a drill weapon and the Globlin Attack NEXO Power. I found the swinging mechanism to be a bit stiff and would always catch too easily which probably wasn’t the intended effect. Alternatively, I found you can clip the chained Globlins to the back of BM’s shield. The second power is the Spirit Vortex, which includes a shield-like piece made to look like swirling mystical energy which looks pretty cool. The third and final NEXO Power is Dynamighty which… conjures dynamite? Maybe it does, I don’t know, I’ve only managed to scan a couple powers into the free app (which we’ll talk about later) so I’m unsure what all these do in-universe. Aaron is the NEXO Knights team jokester and resident sharpshooter. He’s the laid-back gamer of the group and even uses his shield as a flying hoverboard! His Ultimate set contains 82 pieces and one instruction booklet. Again, Ultimate Aaron comes with a neat little display for himself and, living up to the ultimate moniker, Aaron looks like he’s rocking a powered up version of his original form with translucent green armour pieces. Aaron’s default loadout includes an upgraded version of his trademark crossbow, a green energy stud blaster backpack and the Arrow Strike NEXO Power. That is a lot of green… This form is really quite cumbersome and I find it difficult to pose him but he’s got a ton o’ guns so that’s cool. The Target Blaster NEXO Power seems to revolve around marksmanship and includes a more traditional bow and a night-vison helmet. I imagine this would be for quick, precision strikes against the evil lava monster army. Finally, Aaron’s last NEXO Power is quite possibly my favourite because it both matches his personality and is utterly ludicrous. The Banana Bombs NEXO Power combines with Aaron’s Ultimate armour and grants him a couple banana blasters on his back with plenty of extra ammunition. Combine that with his cheeky alternate face and Aaron definitely becomes more endearing for me. All in all, the Ultimate sets I’ve reviewed here are a good representation of the line and I really dig them. They’re nice entry-level sets for the NEXO Knights line and all the characters are present between the two waves (wave 2 coming later in the summer) plus you get 3 NEXO Powers per set which will make strides towards you completing the set of 108 that will be available, which can be used in the free app I mentioned earlier. Speaking of… I apologise for the poor quality screenshots (this is a really cheap tablet and cannot take screenshots) but I actually took a dive into the LEGO NEXO Knights: Merlok 2.0 game that’s available through the Apple app store and Google play store for free. It’s a pretty decent adventure game and every NEXO Power included in the NEXO Knights sets can be scanned into the game for additional powers, which I did. It’s simple, intuitive and is perfect for any young NEXO Knights fan looking for more playability.