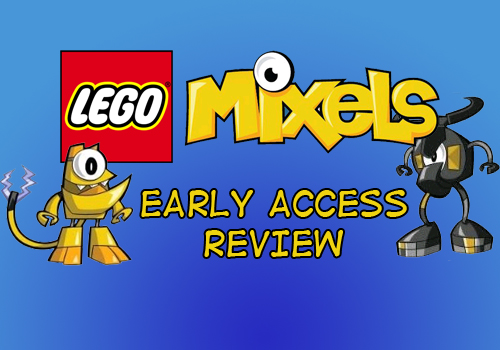 Let’s mix things up with a brand new line!

Thanks in advance to the awesome people from The LEGO Group, Norton and Co and Cartoon Network for facilitating our exclusive early look at the all new collectible, buildable and affordable toy line: LEGO Mixels!

Get creative with LEGO Mixels Series 1, build your own mini characters – the weirder, the better! Discover nine unique characters in the three tribes: Infernites, Cragsters and Electroids – each with their own ways of getting rid of the nefarious Nixels. Dubbed the first ever LEGO constructable collectibles, Mixels is a collaborative effort between LEGO and Cartoon Network for a new series of animated shorts and a collectible toy line. I’ll be looking at a selection of figures today but here’s the trailer for the animated series which debuted on Cartoon Network UK on February 15th!

The LEGO Mixels are a colourful and unique bunch of characters and today we’ll be looking at three from Series 1! Each tribe in Series 1 consists three individual characters and, through the fun and rewarding play pattern, you can combine any and all characters into something wholly unique! The tribe members also combine into larger Mixels! I’ll be taking a look at one of each of the tribe members, starting with:

Zorch, the speediest member of the red-hot tribe of Infernites that live amid the lava near the planet’s core. When Zorch isn’t playing pranks, the fiery jets of this cheeky Mixel’s backside leave Nixels standing in a cloud of smoke. Seismo is a quiet and shy Cragster, and just a nervous tap of this Mixel’s huge feet can cause an earthquake! This can be useful when Nixels attack because Seismo’s stomp can cause an avalanche to bury them! Teslo is the lookout for the yellow tribe. Teslo has an electrically charged tail to zap any Nixels who challenge him. This dynamic Mixel has a secret fear of heights… well, not so secret, but the other Electroids don’t let Teslo know that they know. All these characters come in a colour-coded pouch with the character’s portrait on it. Each contains an instruction booklet and a bag containing all the pieces you need to construct your Mixel! Watch out though, as when I built Teslo, I found a sneaky little Nixel inside! I don’t know which other characters have Nixels come with them but it’ll be fun to find out! Each model features up to 70 pieces of LEGO – including brand new elements such as eyes, teeth and ball joints. You can get super creative by mixing and matching your models to create hilarious new characters! I have to say that when these were first revealed, I wasn’t very interested in them but after having a few to play around with and looking at them from a consumer stand point, I highly recommend this line. The variety of pieces, the simple yet intuitive building process, as well as the RRP of just £3.00, makes any one of these figures an impressive release on their own but with the combining play pattern, that just adds so much play value to these pocket money building sets. My personal favourite is Teslo, I adore his goofy face and electro-tail (and his little Nixel pal, too!) but I also like Zorch’s expressive monobrow and Seismo’s asymmetrical and articulated legs. If none of these characters catch your eye, don’t fret, here’s a little sneak peek at Series 2 and Series 3 to whet your appetite! After looking at these future series, I think I’m going to be all in on this line! LEGO Mixels will be available in all good retailers from March 1st 2014!