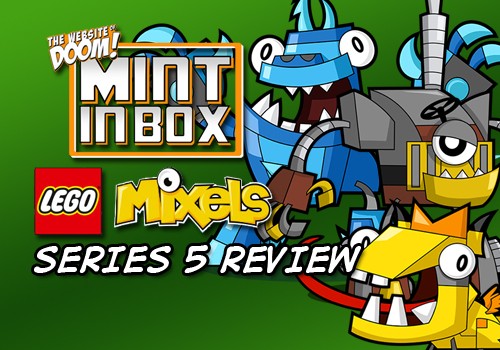 It’s a Mixel Mash! It’s not a graveyard smash, however.

Covering LEGO Mixels has become kind of my “thing” now. My most viewed review on yotube is Mixels-related and I’m consistently asked to cover these pocket money sets to the point where I’m now reviewing an entire wave! Much like the previous Series, this one features a returning Tribe in the form of the Frosticons but are joined by newcomers; the Klinkers and the Lixers. The Lixers are obviously tongue-themed Mixels and that is quite disturbing on a number of levels. They’re also the weakest addition to the line since the Spikels in my opinion. Turg is like some horrific Sarlacc with legs. He’s described as half-frog/half-chicken and I can kinda see that. His giant tongue disturbs me a lot! He’s also the Lixer designated to come with a Nixel, which is a new variant, I believe. I thought Spugg would be my least favourite, simply being a vaguely dog-shaped Mixel but he’s got way more charm than I expected. He’s got this sleek, sloped torso that I had fun building. Tungster is probably my favourite, coming with a segmented tongue and, for some reason, wings! It’s weird how I tend to gravitate towards some Mixels over others but I guess that’s the case for everyone. Lixers Max takes a lot of design cues from Spugg and is pretty weak. He’s just a larger version of Spugg with Turg’s tongue (which gives the Max form a cool action feature) and Tungster’s wings. Then again, I can’t think of anything that follows a tongue theme and wouldn’t come across like something out of John Carpenter’s The Thing. The Frosticons make their return in 2015 with a couple cool new ice-themed Mixels and one that has ski legs. Snoof. Huuuuuuuuurrrrrrrgh. I mean no disrespect to the LEGO designers but that is phoned-in. Points for having ski-legs but the rest is just rubbish. I really have nothing to say about him. Krog is much cooler looking, with the ice mane and whole hunched over yeti look. He’s got some gnarly looking teeth and he comes with a Nixel too! Chilbo is probably my favourite, with his goofy-looking eyebrows and weird sloth claws. His torso is pretty cool and I’d love to see more bipedal Mixels use this design in the future. Frosticons Max (2015) is a ton of fun. He’s a rolly-polly brute and I loved building him. He’s like a big, stocky, polar bear but with a sweet action feature; he shoots ice missiles out of his hands! That’s so cool (pun intended). The Klinkers are a distinctly machine-like race of Mixels and between these and the Orbitrons, I can’t wait to see more and more weird mechanical Mixels in the future. Gox has a golden moustache. I did not realise this until I looked at his cartoon form and that retroactively makes up for his kind of boring design. Sure, he’s a mono-eyed steampunk crab but it’s the moustache that sells it! He’s also the one with a designated Nixel packmate. Kamzo is a portly gearhead with one massive spinning clamp. His asymmetrical design was one of my favourites since this series was unveiled and he doesn’t disappoint in person. I adore the little dude. Jinky is… special. He clearly wants to make friends with everyone and everything around him. He’s a gangly, lumbering oaf and I love him. He’s my favourite. It’s his goofy face, I think. Klinkers Max is really awesome! He’s a steam punk Frankenstein cyclops and I’m finding it really hard to choose a favourite between him and Frosticons Max. They’re both great but for different reasons. Because of the gears that make up the trio, Klinkers Max has a gear assembly in his torso that allows his arms to swing. Much like with the Bionicle figures that do this, it makes it bear to pose him and I can’t help but feel it brings the experience down a little. Overall, I’m really happy with LEGO Mixels Series 5. The new additions are most welcome and I’m really getting into building Max figures and if they continue to have action features, that’s all the better. I’d recommend the Klinkers full-stop, the Frosticons for their Max form and your mileage may vary with the Lixers but it’s a fun series and you can’t grumble with the price point, piece count or character of this fantastic line.