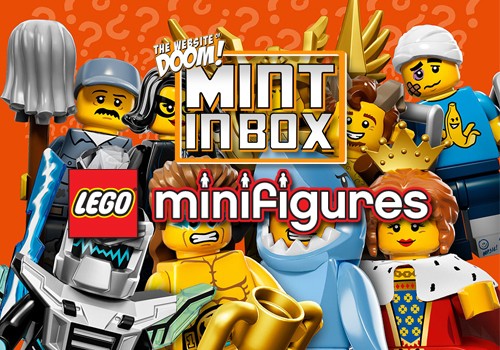 I began collecting LEGO Minifigures a loooooong time ago now and my collection is quite substantial so whenever a new series comes out, I find myself just picking and choosing the ones I like (Animal Suits being my bread and butter). Luckily, LEGO have got my back and have sent a small selection of blind bags for me to open for you lovely peeps. Let’s crack them open! Starting off mediocre with the Queen. Royalty holds no real interest for me but it’s neat that her dress piece is brand new and she could make a nice companion piece for the Classic King from Series 13. Next up is the Janitor! He reminds me of Scruffy from Futurama and, surprisingly, he has a new piece in the form of the mop piece. It doesn’t really stay on the pole piece very well but that may just be my version. The Frightening Knight appears from the depths of history to strike fear into the hearts of his enemies. Maybe it’s because I’ve been on a Nexo Knights kick recently but I can definitely see some modding potential here to make some ‘dark’ Nexo Knights. Hailing from and made of Parts Unknown; it’s the Wrestling Champion! I love the Shark Suit Guy (who I already bought before this review) but this guy is just as awesome. He’s like a mash-up of the Ultimate Warrior and Sting and he’s got something that no other LEGO minifigure has ever had; a mullet. LEGO made a mullet hair piece, just for this guy. That’s amazing! Every series of collectable minifigures comes down to personal taste but at the very least, with 16 characters and an affordable price point of £2.49, there’s a little something for everyone here.