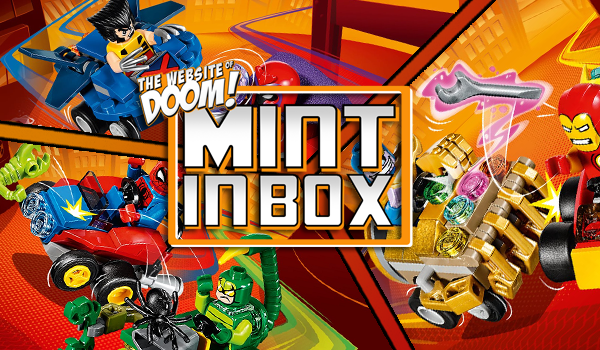 We’re back for round two of this year’s LEGO Superheroes Mighty Micros and this time it’s Marvel that’s up to bat with a trio of terrific sets.

We get a nice mixture of franchises showcased this time with Spider-Man, The Avengers and X-Men all getting the spotlight! Let’s get started with Marvel’s golden boy himself… Spider-Man! Scorpion! A match up that doesn’t happen nearly often enough in my eyes because Scorpion is a pretty cool villain, design-wise. The Spider-Man minifigure is much like last year’s but with an all-new, all-different wince! Or a wink. I suppose it depends on your perspective. Scorpion, meanwhile, looks like an adorably cartoonish version of his minifigure in the LEGO Spider-Man: Web Warriors Ultimate Bridge Battle. Both minifigures also come with an animal accessory tied with their theme. In terms of the karts in this set, I’d initially written the Spider-Man one as uninspired until I realised that it was a simplified version of the infamous Spider-Buggy and I kind of walked back that opinion. It’s cool but still not as cool as Scorpion’s brutish claw-tank-thing! This thing is essentially a box on wheels but between the claw-like appendages and integrating Scorpion’s own tail pieces for the vehicle’s stinger is pretty clever. Over with the X-Men, we have the comically mismatched Wolverine and Magneto. We don’t see the X-Men often enough in these sets so it’s great to see them here (and I’m hoping next year will see Deadpool in a mini-chimichanga delivery truck). The minifigures are just as adorable as ever but, in an ironic twist, even more-so because Wolverine is an immortal, ninja-slaying samurai Canadian and Magneto is a holocaust survivor who has a mad-on for a human genocide. These two characters, out of all of Marvel’s characters, should not be this cute. Again, their associated karts are hilarious! Wolverine is flying around in a shrunken Blackbird jet and Magneto has a giant magnet on it! They’re both really fitting with the characters and exemplify the tongue-in-cheek humour that I really like about this line. Finally, with The Avengers and in the spirit of the future movies, we have Iron Man vs. Thanos. Earth technology versus space magic. Tony shouldn’t be looking anywhere near as cocky as he is. In terms of minifigures, Tony’s Iron Man design is so simplified that it looks like a Halloween costume and he’s not helping his credentials by bringing a spanner to an Infinity Gauntlet fight. It’s no wonder that Thanos has the kind of manic glee on his face that comes from a sadistic villain who knows he’s going not only murder the hero but wipe him from existence. Quip your way out of this one, Stark. The karts are equally laughably one-sided as Iron Man’s is a variant on The Flash’s from last year but with a quartet of repulsor jets. On the other hand, figuratively and literally, Thanos has used the Reality Gem to conjure up a kart shaped like the Infinity Gauntlet! That’s decadent and arrogant on a truly cosmic level but if I had a complaint, it’s that the gold used for this kart isn’t uniform, with some blocks cast in a metallic gold while the rest are a dull, lighter gold. It’s kind of the same problem that Wonder Woman’s jet faced but still, it’s a brilliant show of Thanos’s silly side and that’s saying something from a cosmic villain who once pestered D-Tier hero Hellcat in a ‘Thanos-copter’. Once again, the creativity of the LEGO Marvel Superheroes Mighty Micros line shines through again with a brilliantly clever and fun set of builds. You can purchase these online and in stores for £8.99 each and I highly recommend picking them up for yourself or the Marvel fan in your life!