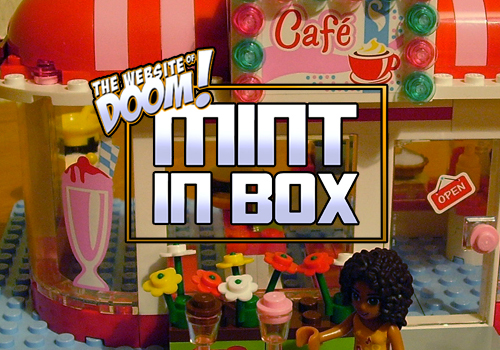 A brother/sister review of some girly LEGO!
Hi guys, Sharp-O back once again for another Mint in Box: Ultra 2014 edition and today we’ll be looking at something my little sister got for Christmas and that she wanted to review but first, a little backstory.

Back in the olden days of 2012, LEGO reinvigorated their dismal “For Girls” range (Anyone remember the dark days of Belville? BECAUSE I DO) and came up with the LEGO Friends theme and despite some initial wariness, the line launched to critical acclaim, being the 4th most popular LEGO theme that year; behind City, Star Wars and Ninjago. It was praised for appealing to the mainstream with horses and vet clinics to the more diverse hobbies of young girls, like science and magic! But enough waffling, let’s crack on! Sharp-O: Today we’ll be looking at the LEGO Friends City Café that Aimee got for Christmas!

Aimee: Yaaaaay! I can’t wait to get going. Sharp-O: Well the first thing to note is the piece count, which is 222 and split into three bags.

Aimee: And the bottoms! Blue bottoms and the book!

Sharp-O: Yup, and there’s a couple sticker sheets in there but looking at the box, I don’t think we’ll need more than one sheet.

Aimee: They are spare ones just in case we mess up.

Sharp-O: I’m not going to mess up! Let’s look at the mini-dolls. Aimee: I really like them. I don’t think I’ve got these ones.

Sharp-O: The box says their names are Andrea and Marie.

Aimee: I like the one with the bumpy hair and the other one looks like she works at the Café.

Sharp-O: Yeah, I do like that they do Mini-Dolls instead of Minifigures, even if they don’t match up with your other sets as much.

Aimee: I’ve got lots of Friends figures though! Sharp-O: The first thing to build is the table and chairs out front. It’s quick and simple but it’s got fun elements for the milkshakes and fencing.

Aimee: I’ve never seen the red round thingies before… Sharp-O: The main Café is a more interesting build, even though it’s mostly two walls and some signage. I built the walls and windows up, adding the lower roof before I applied the stickers on the windows and inner walls. Aimee: I made the awesome stripey roof but I really, really loved putting the sign on. I did it all by myself and only messed up on the lights but Richard helped me put the sticker on. Sharp-O: She also managed to build the interior booth, tables, counters and some kitchen pieces without my help as I put together some flowers, a stand alone sign, the condiment table and a gumball machine out front.

Aimee: I liked making the sauces and burger! It was really cool. And I LOVED the milkshake maker. Sharp-O: The complete model, while basic, has plenty of enjoyment to be had in it’s construction and as a playset. The pastel colour scheme, along with the constructable food items and large amount of accessories makes this a fun LEGO playset. Aimee: I have 8 LEGO Friends now and they can all fit in the Café, and they call all have milkshakes and burgers and cupcakes. It’s lovely and really cool. I really enjoyed making the shop-front and helping Richard.

My little sister wanted to write a review for this set and I hope you guys enjoyed reading this little collaboration. She wrote a lot about how much she enjoyed the experience but I’ve straightened out the grammar and spelling for ease of reading. I highly recommend picking up many of the LEGO Friends sets for girls who like LEGO. They have a broad range of subjects to appeal to any hobby or interest so you should be able to find one that’s perfect. If you could leave a nice comment below for her to read, I would greatly appreciate it and I’ll catch you next time for another Mint in Box!