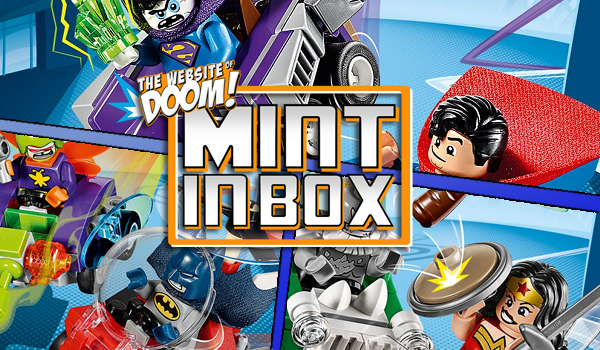 And, just like last year, I’m lucky enough to be taking a look at both sets of the brand new LEGO Superheroes Mighty Micros wave and we’re kicking off with the DC offerings!

Immediately, it’s nice to see a more varied selection of characters; having the Big Three represented is a good choice but also an eclectic selection of villains too! Speaking of eclectic… BIZARRO LOVE SUPERMAN! It’s everyone’s favourite Kryptonian son and his evil(?) twin! This is a fantastic set in concept and it really pays off! Superman and Bizarro are perfect mirrors of each other, Supes being all perfect and Bizarro looking grim as anything, and that even extends to them coming with their opposite number’s particular flavour of kryptonite poisoning! Now, I was all ready to not like this set due to Superman’s kart being a plain-jane plane with fists on it but because Bizarro’s is the exact same vehicle but BACKWARDS — I’m instantly sold! It’s a clever idea that I wholly approve of. Batman’s back (Go see The LEGO Batman Movie, I hear it’s really good!) and this time he’s battling a odd choice of villain but one he’s faced in a set I reviewed previous; Killer Moth! Killer Moth isn’t just a downsize of his previous minifigure. I mean, he IS, but he’s also looking comically simplified like he’s straight out of the Batman ‘66 series. Which is funny because there’s a definite Adam West vibe from this Batman. Between the light grey and blue costume and his vehicle, I do get a retro vibe. Killer Moth rides in a bug-mobile that’s more mosquito than moth but it’s goofy-looking and neon-coloured so I naturally love it but I’m also a big fan of the understated Batman ‘66 homage with the black and red helicopter. It’s a much more interesting set for Batman than last years, that’s for sure! Rounding off DC’s trinity, we have Wonder Woman fighting Doomsday! Why not Ares or Circe? Probably the same reason for Hulk vs. Ultron last year, because it was part of a big movie! Wonder Woman, like everyone else, is made up in a simplistic rendition of her iconic costume, decked out with a sword and shield and a cocky grin. Doomsday, meanwhile, looks utterly ridiculous with his bone neck beard and brown cudgel. Doomsday’s vehicle is suitably chunky and covered in spikes and teeth and fire in his signature colours. Wonder Woman is riding in her invisible jet! It’s got wheels on! I like the idea but the execution is a bit lacking. I wonder how much it would add to cast all of the jet parts in clear plastic so you don’t have the design interrupted by the ugly grey bricks. Still, it’s a fantastic idea! Unlike the previous assortment, where I only recommended the Flash/Captain Cold set, I think each of these two-packs have their own merits and I recommend every one of them if you’re a big fan of the characters involved! The LEGO DC Comics Superheroes Mighty Micros retail for £8.99 each and are available in stores and online!