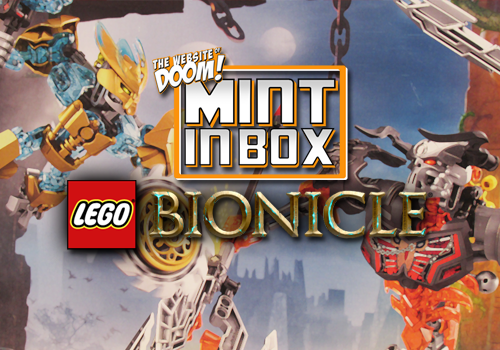 The legendary battle that’s been in the works longer than this review! 70795 Mask Maker vs. Skull Grinder is the flagship set of the Winter wave of LEGO Bionicle 2015 and retails for roughly £25. It features 171 pieces and sees Ekimu, the wise Mask Maker defend the powerful Mask of Creation from the insidious leader of the Skulls, Kulta the Skull Grinder. As with all Bionicle, you start with the skeleton and much like Skull Slicer and Skull Basher, Grinder is doing something different, namely the huge shoulder pads added to his base skeletal form. It’s nice to see the design team changing things up a little because after 7 or so figures with the exact same action feature assembly, it was starting to get stale. Once fully armoured up, Grinder stands at an impressive 8” tall and certainly looks the most robust of the Skulls. His menacing demeanour is evident in the gruesome façade he wears (and also shares with Skull Warrior). His weapons include the standard Hook Blade but also the impressive Mask Stealer Staff, which he wields one-handed. Much like other Bionicle figures with the arm-swinging action feature; his posing his somewhat limited, especially given how top-heavy the staff weapon is. The Mask of Creation is simply that; an ornate mask accessory, etched with mystical runes and held aloft by a simple stand that doesn’t quite work for me. I like the idea, but the execution feels off but maybe that’s my copy. The mask fits very loosely to the stand and will often slump down, sending the whole assembly toppling forward. The Mask Maker takes the form similar to that of that of the Protectors I previously reviewed. His base skeleton is near identical in that respect and so are his armour pieces but the new golden pauldrons make him stand out amongst his peers. His default mask is much the same as the Protectors as well, with the same faded translucent plastic effect. He comes equipped with the Hammer of Power, which also features a stud launching gimmick (a disappointing amount of extra studs this time around it must be said) and an awesome rotating Saw Shield.

“But Sharp-O,” I hear you ask, “Why does the Saw Shield look incomplete? Did you screw up the simple building process?” No, no, dear readers, t’was not an error on my part… For the first time in my decades of dealing with LEGO products, I finally had a set that was missing a piece. A vital piece in fact! So I did what anyone who finds themselves missing a piece should do… I went to LEGO’s Customer Service page and went through the Missing Bricks process! It was incredibly easy to use and simple to find this set and the helpful guide easily helped me find the piece I was missing. Within 10 working days, the piece had been delivered to my door FREE OF CHARGE in this awesome little baggy . It’s an amazing service and I highly recommend people use it should they find their sets have missing or broken pieces. Now, Ekimu is fully loaded for his battle with Kulta and I have a neat story for my review! Standing them side-by-side, the size difference is staggering. The Mask Maker only clocks in at around 5” tall and Grinder towers over the little dude. We all love an underdog though, right? All in all, the 70795 Mask Maker vs. Skull Grinder set is an absolute blast to build, play with and I definitely feel you’re getting a ton of play value for your £25! Two fantastic figures with lots of play value plus all the cross-play you can get with the other LEGO Bionicle sets means that this is highly recommended! If you have any thoughts on the LEGO Bionicle line this year, please leave your comments below and I’ll catch you all next time for another Mint in Box!