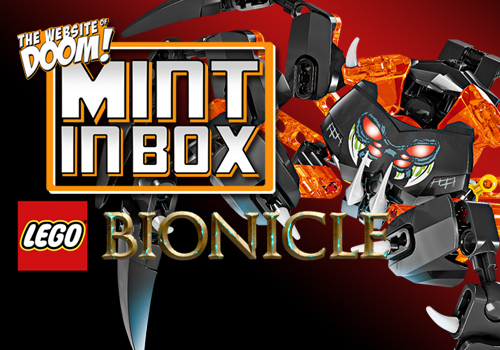 The incy-wincy spider crawled up to take your face…

70790 Lord of Skull Spiders is the primary antagonist for the first wave of Bionicle 2015 figures and retails for around £12.99. He’s pretty fearsome looking! He is the guardian of an ancient city on Okoto and the Toa masters must get past him, and his legions of Skull Spiders, if they want to gain entry! His packaging is in the same hexagonal prism shape as all the others which I haven’t really mentioned until now but I like it. It gives the line a unique profile on the shelves. His accessory is a Golden Skull Spider mask but unlike every other release, it does not feature an limbs. In-universe, this is how the Lord controls the smaller Skull Spiders. While his piece count is larger than the Toa and Protectors, coming in at 145 pieces, the Lord is a rather Spartan build, most of which is building the lever mechanism for its crushing action feature! Once all his pieces are on, this action feature makes more sense, as he can grip and crush the Toa and Protectors with just squeeze of the lever. I would like to have seen something else included, maybe some sort of string or web missile but for what it is, it works great! I do love how modular the Technic line can be when put into something with a little more character than detailed vehicles with moving parts. All of the Lord’s exoskeleton is made for body pieces that the Toa use and that means you could probably create a bipedal Lord of Skull Spiders which would be awesome and probably a little more intimidating than his current form. It’s not bad, it’s just… small. He feels less like the big bad and more like a lieutenant and given the Skull warriors that are coming out in the second wave, which are more or less the same size as the Toa, this may be the case. 70790 Lord of Skull Spiders is probably the weakest out of the Bionicle sets I was sent to review but that’s not to say it’s bad, it’s just “okay”. I would have liked to have seen a couple more action features to add to his threat level but the crushing action feature works well and he is a giant spider (with only six legs though, eh?) so that makes him pretty creepy.

Be sure to take part in the #BionicleMaskHunt competition! More information can be found here and I’ll catch you guys next time on Mint in Box!