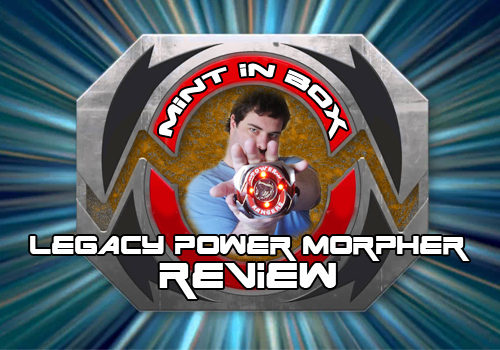 May the Power protect you. Always. When I was 6 years old, I was introduced to the Mighty Morphin’ Power Rangers. This was my first foray into the world of superheroes, long before my first steps into the realm of comics. As such, it was my first introduction to concepts like heroism, chivalry, selflessness and protecting others and it really resonated with me. I loved the franchise as a kid and 21 years later, I’m embracing the Japanese source material and developing a love for the tokusatsu genre as a whole. Today, I’ll be delving into the rich history of this 21 year old franchise and bringing you something legendary: The Legacy Power Morpher.

As part of the 20th Anniversary celebration, Bandai produced a number of collector-oriented items based on Mighty Morphin’ Power Rangers’ first season, the Legacy Power Morpher being a new, updated rendition of the iconic transformation device that would transform five  teenagers with attitude into Earth’s greatest defenders. Bandai went all out with the Legacy Morpher, even the box is a fantastic throwback to the packaging of old. Not just the colours and general aesthetic, but the thick cardboard material. The green hues and metallic embossed lettering are reminiscent of the ’93 Megazord’s box art. The Legacy Morpher itself is rendered in die-cast metal and plastic, featuring the original five Power Coins (also die-cast metal) and lights and sounds. As well as the Morpher and Coins, you also get a holster that allows you to clip the Morpher to your belt but due to the weight, tends to droop forward.

The Morpher itself is hefty, robust and ever so shiny! The metal shines, the paint and decals are well applied and even the reverse side has a very nice nod to the original Sentai, Zyuranger, in regards to its ornate design. Underneath the folding handle is the on/off switch to activate the light and sounds. As a fun little extra, when flipping on the switch, the classic Communicator tune from the TV show plays. This particular release features the five Power Coins representing the first five Rangers and their initial Zords, based on prehistoric animals. There’s also a second version of this Morpher, which is in a Gold scheme with the Power Coins of the Green and White Rangers. Each is replicated to the tiniest detail of the props used in the show and are beautifully cast in die cast metal. The reverse features the Mighty Morphin Power Rangers logo and all very heavy! You can easily swap out the coins with one another by pressing the ‘Z’ on the back. When pushing the button on the handle, the die cast face plates spring open and four lights flash while a swooshy noise plays. Holding that button down while trigger a flashing light sequence to the tune of “Go, Go, Power Rangers” It’s just the instrumental but it’s fairly lengthy and, just like the communicator sound, is a superb little treat for fans. The Legacy Power Morpher is an absolutely brilliant collector’s item for fans of Power Rangers, Super Sentai or even pop culture buffs. It looks fantastic on display with my ’93 Dragon Dagger and the MMPR 2010 figures I have but I think they’ll be joined by someone new pretty soon, just wait and see! The Legacy Morpher is a Toys ‘R’ Us exclusive and retails for £49.99 and I feel it’s worth every penny.