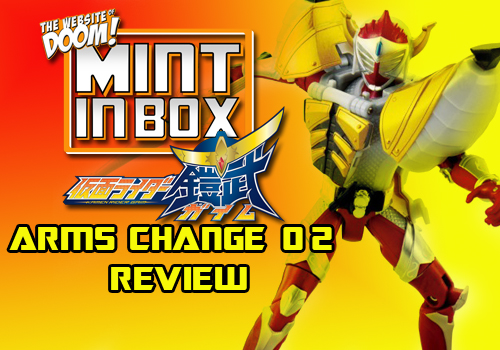 For when Kaito Kumon eats a banana, an amazing transformation occurs! Kaito is Bananaman!

We’re back with another Kamen Rider Gaim figure from the Arms Change line; this time is the man who will make the world strong, Kaito Kumon aka Kamen Rider Baron! The second protagonist of the show, Baron utilises the power of the Banana lockseed and, yes, that makes him my favourite Rider just for aesthetic alone! Just like Kachidoki Arms, AC02 comes in a similar packaging but in delicious red and yellow hues and, again, highlights the core gimmick of the show and this toy line. It also features a cross-promotion with Kamen Rider Ryugen (who’s up for a third helping of fruit-themed warriors?). The inner tray is also very similar to other releases and includes everything you’d expect Baron to come with. The Pre-Arms form shows a lot of differences to Gaim, apart from his legs. His under-armour is more like chain mail, which is befitting since he’s designed more like a European knight rather than a Japanese samurai (Gaim) or Chinese warrior (Ryugen). While paint is minimal, I do like the ornate detailing on the silver plate armour. It’s a nice touch that could have easily been left out. The Banana armour in it’s fruit mode looks like a rather stunted banana but otherwise looks great. Most of the surface is coated with this lavish gold but stops just short of the full design, but you’ll never see the unpainted grey plastic when you switch to armour mode but enough stalling, Kaito is about to show you his true power! BANANA! The core AC gimmick is as easy as you see in the pictures and damn if it’s not a ton of fun! I even made the henshin sounds because the utter ludicrousness of this transformation sequence makes me smile. Baron can pull off some fairly decent posing options despite not being as poseable as a Figuart, and staying upright isn’t as much of a problem as you’d think because of the top heavy armour. His Banaspear (which is more of a lance…) is replicate very well, looking like the peeled-banana lance that it should be. It even features an extending tip! Now that I have two of these AC figures, I can now show you how compatible to the figures are with each other. I can easily swap the Banana and Kachidoki armours between Baron and Gaim and both wear them with no problem at all. It’s a real testament to this line that this core feature of the show has so much cross-play in the actual toyline. Kamen Rider Baron is one of my all time favourite Riders, both in character and design and I have to give a massive thank you to my reviewing comrade-in-arms-change, Josh Reed, the handsome toy reviewer of Collection DX. I’m impressed with this figure’s playability and super happy to have in my collection! I highly recommend picking up any AC figures you can get your mitts on because they are an absolute blast!