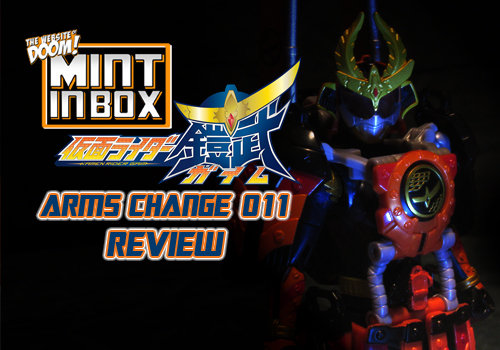 Hey guys, Sharp-O back once again with more toys from glorious Nippon and today we’re looking at my first figure from Kamen Rider Gaim! Kamen Rider Gaim is the 24th entry into the franchise and features humanity coming face to face with the reality of an infestation from another dimension called Helheim. A chosen few use lockseeds to transform into Armoured Riders and defend–Actually, they spend most of the series stabbing each other in the back and trying to save their own skin because this is a series written by Gen “The Butcher” Urobuchi, a man who takes great delight in putting his characters (and the audience) through the ringer.

Today, the spotlight is on Arms Change 011: Kachidoki Arms. The beauty of the Arms Change toy line is that, much like the show, the various lockseed armours are interchangeable between Riders, meaning you can mix-and-match your figures! Gaim’s Triumphant Arms debuts about half way through the show and despite getting another upgrade after this one, I consider this to be the orange samurai’s true final form. AC011 comes in a lovely window box, showing the figure and accessories while having a half image of the figure in full regalia. The box is uniquely designed for this figure, with all the images relating to Kachidoki Arms. The reverse of the packaging shows the figure in some dynamic poses as well as showcasing the Arms Change gimmick. This set consists of a Gaim figure, his armour in fruit form and helmet, two variations of the DJ Gun, a Musou Saber and two sashimono. The base figure is a variant of the standard Gaim Pre-Arms for, with the Kachidoki lockseed affixed to his Sengoku Driver and this Arms’ unique head crest already in place. Paint is used sparingly but to good effect, picking out important features. Articulation-wise, this is a huge step down from the S.H. Figuarts I’ve reviewed before, mainly sticking with swivel or universal joints rather than an abundance of ball joints, the only ball joint being on the neck and feet. It may be less articulated but you can still get plenty of posing out of this base form but let’s get to the main event: LOCK ON! Another fun feature of this line is the intricate transformation of the lockseeds from Fruit to Armour forms. They unfold and lock into place exactly as you’d expect them to. That said, Kachidoki is especially hard to return to Fruit form once unfolded, the various tabs have to be in EXACTLY the right position and even then need a healthy amount of force to tab them. Running through the process a number of times can help but it can still be a bear. Once donned in his zesty shogun attire, Gaim truly does look every bit the valiant defender of Zawame City. The helmet’s orange shows through the magnifying visor but not nearly as much as I like, leaving the visor to look rather drab in comparison to the other vibrant colours that make up Gaim’s triumphant form. Again, paint apps are used sparingly and there’s some really nice metallic silver and gold paint in amongst the reds and oranges. Unfortunately, this bulky armour does hinder his articulation somewhat, it’s mostly confined to his legs. Gaim’s arsenal of triumphant, Invess-destroying armaments starts with the DJ Gun. I can’t stand this thing. As a weapon for a shogun, it could work (Shogun with a Shotgun is a movie I’d watch!) but adding the turntable and sound gimmicks makes this easily the most annoying weapon in the show for me and, unfortunately, this really only compounds that. Now, it’s not the fault of the sculpt, it’s perfectly adequate (if missing a lot of paint) but the problem comes from the hands. They have hinged fingers, unlike the various sculpted hands of S.H. Figuarts, and they’re too weak to hold the front heavy DJ Gun. The somewhat limited arm articulation also leads to a somewhat unnatural pose when holding the weapon with two hands. The Musou Saber (a default sword/gun sidearm to some Riders) is a fantastic little sculpt but is sadly lacking the paint apps present on previous releases. Finally, we come to the sashimono banners that can detach from his back and become dual-wielded melee weapons. They have the Gaim emblem printed on one side and are the weapons I think suit Triumphant Arms the best. Though they are smaller than I’d like, I can live with their size. The Arms Change line is definitely a cheaper and more toyetic alternative to the more collector oriented S.H. Figuarts but you can’t discount their inherent charm because while they’re not as shiny or articulated as their Figuart counterparts, the AC line is embracing the gimmick of the show and incorporating it into a vast number of figures. This is the 11th release of this line and it’s fantastic and I will definitely be picking more up soon!