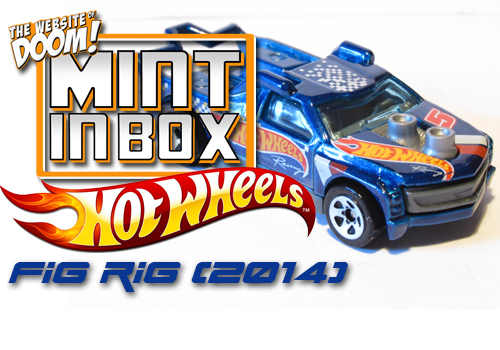 Hot Wheels is an industry leader in small cars that go super fast and that’s cool but why am I suddenly covering a single car on Mint in Box? Because it has something to do with LEGO and you know what I’m like. The Fig Rig is a relatively new addition to Hot Wheels’ ever-expanding fleet of cars but has already garnered much attention for it’s “compatibility with the leading brand”, which is a phrase used to refer to LEGO by knock-offs or third-party accessories. Though in this case, I’m sure Mattel wanted cross-play with it’s Mega Bloks brands but screw Mega Bloks. Hell, even their packaging depicts stylised LEGO Minifigures! Way to throw one of your own brands under the bus in favour of a competitor, Mattel. As with most Hot Wheels vehicles, the Fig Rig is a stylised semi-futuristic pick-up truck, emblazoned with the HW logo. It looks pretty nifty but if you don’t fancy this colour scheme, there are 4 other schemes spread across the past couple years, because Hot Wheels likes to get their money’s worth out of every single mould. The main selling point for this particular car, and why it has gained a bit of a cult following, is because of it’s LEGO compatibility. There are lots of mounting points for Minifigures and bricks, allowing you to customise the Fig Rig in a number of ways. This is a fun novelty but not without its flaws. While the bars for holding on to at the rear are fantastic; the ‘studs’ on the engine and bed of the truck widen at their base, meaning any connection is shallow at best and atrociously ineffective at worst. When it comes down to it, the Fig Rig mould is a fun novelty but not without it’s downsides. Between this and the Let’s GO go-kart that is also Minifig compatible, their worth taking a look at, especially since they’re roughly a £1.