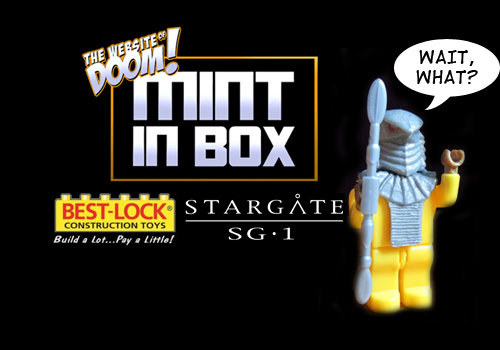 Yeah. You just read that.

Where do I even begin? Do I start with how this set was released in 2013, 6 years after Stargate had finished? Do I make a witty remark about Jaffa being both a delicious cake and a male who can’t ejaculate in British slang? Or do I just show you pictures of the stupidest purchase I ever made. Bloody hell, I can’t believe I saw this on the shelves of a notorious currency-themed discount store and that I bought it “for the laugh.”
I mean, I KNEW this was going to be bad, just look at it. It’s officially licensed SG1 knock-off LEGO. Best-Lock are peddlers of generic building blocks that are loosely based off of the general themes of construction crews, emergency services, military vehicles and space exploration. Y’know, the same crap all not-LEGO companies make but this is baffling. The age of the license, the shit-tier company, the shoddy build quality… HOW? The buildable Jaffa *snrk* comes assembled, already killing what little fun I could have had with this set so I guess I’ll fall back on mocking it. Look at this horrific bullshittery right here. Do you see? Because I don’t think the designers did. Nor the heads of MGM who okayed this. THIS IS WHY YOU WENT BANKRUPT, MGM! If I have one positive thing to say, just one thing about this ENTIRE set, it’s that the iconic staff weapon is rendered quite well! In fact, it’s the only thing that’s not getting thrown in the bin after this review is over. The Jaffa’s *snrk* body is a plain yellow with no printing while the armour and helmet is like the plastic cast-offs from something else. They’re rough, messy and lack any real detail. And here’s the rest of the set looks like, an anemic attempt at a diorama with no effort put into it. Seriously, this is exactly the same as some of their other small sets and it just looks BORING. In the realms of licensed building brick toys, this Jaffa set is certainly living up to its name because it’s just impotent. A dead franchise, crap materials, a boring concept and lazy execution all amount to a 22-piece not-LEGO set that I paid 99p for and I still feel ripped-off. Still, I got a review out of it, that’s something at least.