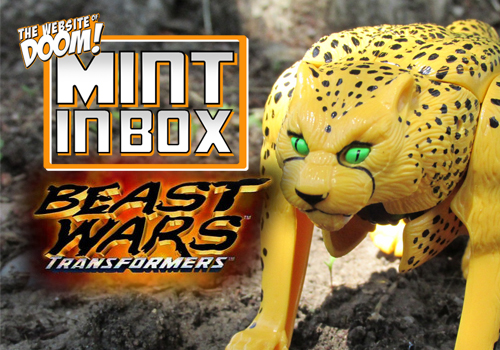 I’m going to take you back to the past, to show a Transformers line that kicked ass.

I grew up with Transformers, from The Movie-onwards and I loved it but when 1996 rolled around, Beast Wars became my bread and butter. This wasn’t just a cool concept that I missed out on by a couple years, this was a Transformers series I could actively be a part of. Beast Wars was a departure from the standard robot-into-vehicle formula by throwing in organic alt-modes and while it was devisive at the time, it soon became a fan favourite TV show and the toyline was just as awesome, utilising a new ball-joint system to increase articulation and bring more advanced transformations. This is Cheetor, the kid-appeal character (like Bumblebee. Or Hot Shot.) who grows into a competent character as the series goes on. Being the kid-appeal character naturally meant he got the lion’s share of toys so this is actually the third variation of the Cheetor mold, denoted by the green eyes (the other two being blue and red). His beast mode is a brick, with little-to-no articulation in his Cheetah form and it’s bulky as sin but this was the Mid-90’s, they were still smoothing out the kinks. Another unique quirk of the early Beast Wars are these “Mutant heads” which were a weird oddity that was thankfully dropped, along with the idea that the Beast Wars character would be purely organic. Cheetor’s robot mode is pretty spot on to his onscreen counterpart. He includes two weapons, a rifle made from his butt and tail (“The highest calibre’s in the rump!”) and a water-squirting ‘gut gun’ which I didn’t receive when I bought this figure second-hand. The moulding is fantastic, the paint apps are crisp, the articulation is good and overall, this figure is a fun novelty from an era long since past. Grabbing Cheetor made me want to start up a Beast Wars collection but I think I’ll just limit myself to the odd one. Did you have a favourite Beast Wars character or toy? Let me know in the comments!