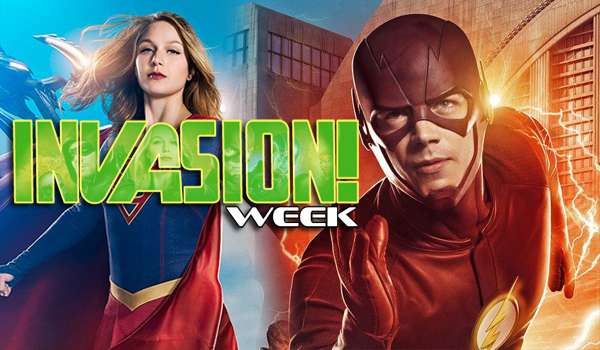 This is already a better Justice League movie than what Warner’s going to be releasing.

And I feel confident in that opinion because while the movies have been struggling after diving in at the deep end, the CW tv shows have had years to build up a solid roster of characters with unique relationships to each other and we see all of that on display in the first part of Heroes vs Aliens!

I was going to cover the Supergirl episode as well because she’s a major part of the crossover but the crossover plot was the focus of the episode for all of a minute at the end of the episode. A scene they repeat here because it’s the only part that mattered but still a nice connecting point. Meanwhile at the Hall of Justice! Wait, what? Yeah this is kind of an odd thing to just throw out there. Barry owns a STAR Labs facility that looks like the Hall of Justice? That’s dumb and I’m someone who loves how dumb these comic shows can be. Why introduce this now and not at the end of the crossover?

Because guess what? I don’t buy for a second that shitty aircraft hangar is out back of this immense place. Even the regular STAR Labs looks like a stadium so they can have decent exterior shots but this place is so unreal that I can see it being destroyed.

What does look pretty decent are the Dominators. Yeah, they mostly look like every alien menace ever but they’re competently animated and have the nasty teeth and big dumb red circle on their forehead that defines their race.

Naturally, having all of our heroes in one place has tons of potential for comedy and we get plenty of it from David Ramsey and Dominic Purcell, especially. But one of Diggle’s lines has a rather poignant double-meaning and leads into what I consider to be the primary conflict of the episode.

Barry’s fuck-ups are finally brought out into the open and, naturally, it causes a whole lot of problems with the team dynamic. We see the full extent of the Flashpoint fuckery with Stein’s daughter being revealed, the future news article being written by someone other than Iris and Diggle’s daughter being erased from history and it disillusions most of the assembled heroes. I do like that Kara and Ollie are the only ones to side with Barry, but for vastly different reasons.

The prerequisite heroes vs. heroes fight is a pretty spectacle but nothing truly amazing but this does mark the first time in over four years that Ollie has run out of arrows in a fight.

This first part was exactly what I wanted from it and the other parts promise to deliver on similar amounts of fun, action and drama so be sure to come back tomorrow when we see what happened to the abducted heroes as Invasion Week covers Arrow!