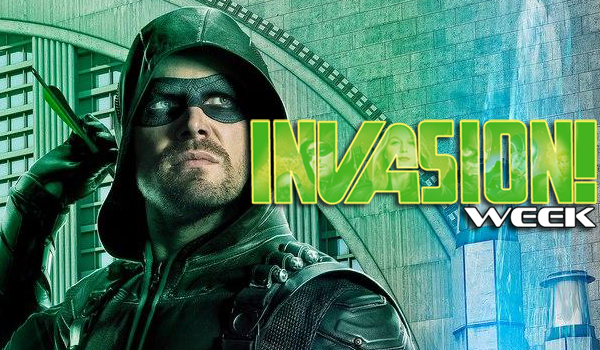 I don’t think that’s hyperbole because while this episode is pulling double duty as the penultimate episode of the crossover and as Arrow’s 100th episode; it pulls it off with aplomb. It’s very much an episode of two halves though so I’ll kick off with the B-plot that continues tying into the Heroes vs. Aliens plot.

While Oliver and Company (nice little reference there, Cisco!) are missing, Team Arrow, and Cisco, rushes to find them by chasing down a piece of tech they need that was recently stolen by one Laura Washington. Not a character I recognise but has more than a passing resemblance to Cyborgirl —  a villainous distaff counterpart to the Teen Titan, Cyborg.

Something they make a big deal out of is Wild Dog’s aversion to metas and aliens, which I find odd because Ragman is essentially a meta though it could be argued he’s just enhanced by the mystical rags soooo… I dunno, it’s resolved by the end of the episode but I figured it was worth mentioning as character growth for Rene.

The most interesting part of the episode is with Ollie, Sara, Thea, Diggle and Ray; all of whom are trapped in a shared hallucination, a seeming perfect world for them. It’s all very For The Man Who Has Everything, a seminal Superman story from Alan Moore, and I love it! It’s so much like that story that I expected the Black Mercy to be involved, much like it was on the Supergirl episode that also homaged that story.

It’s interesting how each person’s ideal life is adapted into this shared dream. Ollie and Thea obviously want their family back (nicely foreshadowed by Ollie’s speech to Barry last episode) but Ollie and Sara also want Laurel back. Ray is engaged to Felicity, who is helping Diggle who is The Hood.

That was an odd branching path until I really thought about it and Diggle wants to be punished/redeemed for what he did to his brother and who does he know that pisses and moans and acts like a grumpy edgelord all the time because he makes piss-poor decisions? Ollie as Green Arrow. It’s funny in it’s own little way.

Flash Fa—Wait, am I allowed to do this for non-Flash shows? Screw it! Arrow Admin: Tommy Merlyn is mentioned explicitly as being absent because he’s a doctor in Chicago. This is a reference to the scheduling conflict Colin Donnell had filming Chicago Med.

Just like For The Man Who Has Everything, eventually our heroes have to break out and it’s a lot less breaking the world and more breaking hearts. There is a nice bit of catharsis for our heroes though, as they face down the projections of those responsible for their traumas and deal with them each in a darkly ironic fashion.

Ollie has Deathstroke, Sara has Darhk, Thea and Merlyn, Diggle and a Ghost representing his brother and Ray with a Deathstroke soldier like the one who killed his fiancée, Anna.

They escape on a stolen Dominator fighter and are picked up by the Waverider and ends on a menacing shot of the Dominator mothership on a direct course with Earth.

This episode is fascinating from a character perspective and does a decent job of continuing the crossover plot line so I’m pretty happy with it but be sure to come back tomorrow as Legends of Tomorrow tags in for the final part of Invasion!