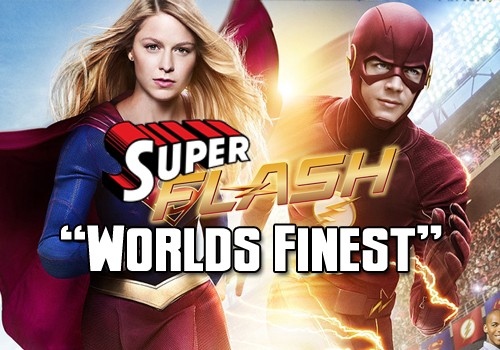 It’s been three days since the world-wide premiere of Batman v Superman: Dawn of Justice and guess what? A 44-minute TV episode showed it up! Why? Well, let me tell you, kids!

Unlike the Man of Steel, Supergirl has been displaying the kind of warmth and sincerity that you expect from any kind of media bearing the ‘S’. I mean, sure, I thought the show was just ‘alright’ to begin with but as it went on, I found the show to be compelling, entertaining and worthy bearing the title of Super. Melissa Benoist is an amazing Supergirl and the cast of the show is definitely on par with the likes of Arrow and The Flash. Speaking of…

TEAM-UP, BITCHES! Since this historic cross-network, cross-dimensional crossover feature The Flash, I just had to cover it for Flash Facts! Much like the crossovers with Arrow, this team-up’s strength doesn’t lie in the superhero action (it’s TV show; there’s time and budget constraints) but in the character interaction and let me tell you…

It. Is. Golden. Grant Gustin and Melissa Benoist are amazing to watch side-by-side. Barry’s natural charm and intelligence are a good foil for Kara’s over-eagerness and rookie mentality and this is to the credit of the actors, who seem to have had genuine fun during the shooting of this episode. Doesn’t hurt that both the characters and actors have an abundance of chemistry, making their all-too-brief interactions as memorable as they are adorable.

The rest of Supergirl’s cast also interact well to the visiting speedster (especially Jimmy Olsen’s jealousy of Barry) but the one thing I lament is that we never get to see J’onn and Alex interact with Barry. The overprotective sister and Best Alien Dad could have made for some great comedic moments and throwing the Martian Manhunter into this team-up could only have elevated it. Ah well, there’s always next year!

Overall, Worlds Finest gets a massive recommended stamp if you’re watching The Flash. While it’s short (seriously, why wasn’t this two and a half hours long?), it’s still an immensely enjoyable ride and, hopefully, might encourage more crossover in the audience too.

As an addendum to the meat of the episode, Kara and James finally kiss – only for Olsen to go walkabouts as the mysterious Myriad technology (a sub-plot for the past few episodes) is activated and the citizens of National City become drone-like, marching in formation. What could this mean? Well, I guess you’ll have to tune into Supergirl to find out but I’ll see you guys tomorrow for both S.H.I.E.L.D. Exposed and the proper Flast Facts for this week!