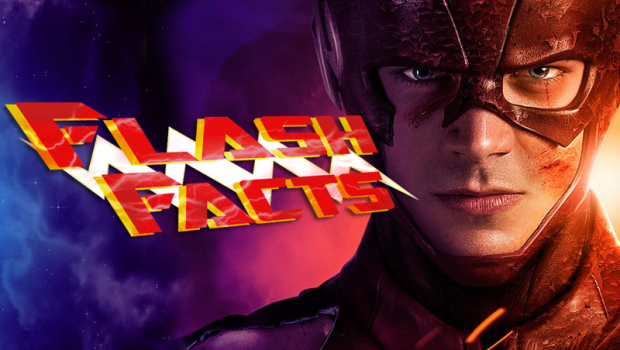 Flash Facts – “We Are The Flash” SEASON FINALE

This season finale kinda snuck up on us, huh?

I mean, with all the filler this season, the last two episodes feel like they’ve had to pack in all the major points they wanted to hit to wrap-up this story. We Are The Flash has a strong familial undertone, from blood-ties to the family we choose and that’s strikes a nice contrast to DeVoe, who has no one.

One of the major points is the birth of Joe and Cecile’s daughter; Jenna Marie West. Cecile’s went into labour when The Enlightenment began and Jenna was born when it came to it’s conclusion.

In a truly heartbreaking moment, Harry sacrifices the last of his remaining intelligence to use the Thinking Cap to relay a message to Cisco. It’s awful to see him slowly going and be left a gibbering mess. Oddly, he begins repeating the same phrases that Barry was muttering when he left the Speed Force and writing in the same cryptic language. Perhaps this is a long-game to tie-in with next year’s villain?

In a curious moment, amidst Barry entering DeVoe’s mind to find the last remnant of good in him, Cecile grabs Caitlin’s arm and talks about a ‘Thomas’ in an unnerving voice. Now Caitlin’s reaction could be taken a couple different ways, between shock at a revelation or simple confusion, but after doing some cursory digging, I can’t find any reference to a Thomas in Caitlin’s history but it must have significance, surely. Only time will tell if this is going to figure into the Killer Frost Retrieval Arc of Season 5.

RALPH’S ALIVE! I’m so happy that we’re not losing Hartley Sawyer and his return was suitably emotional. It’s kinda clever, in hindsight, since DeVoe is only inhabiting Ralph’s body, that Ralph could come back.

DeVoe is defeated in his mindscape, after the ropiest CGI horde of black-clad guys this side of the Burly Brawl and everyone is all smiles, which is grand. Marlize even sticks around long enough to help fix Harry.

I know this scene was attempting to be a bittersweet “end of an era” but I can’t take a Tom Cavanagh departure seriously when the odds are good that he’ll just be back next season. While he’s not back to his full intelligence, Harry seems happy that he’s back to a form of balance between his head and his heart so his character growth isn’t undone.

Wally has a brief return to give a bit of an update about his time with the Legends and to celebrate the birth of his sister. Amidst the festivities, an unannounced guest arrives to throw a spanner in the works and properly set up the next season.

Nora Allen, the speedster daughter of Barry and Iris, clad in her mum’s signature jacket announces herself to the Flash family, after some cute little nods to her various appearances beforehand, not to mention her sneakily helping Barry take out the satellite earlier. So yeah, Nora has screwed up and revealing herself is the better option than fighting this new threat alone so I look forward to having the utterly adorable Jessica Parker Kennedy join the cast next season.

Yes, you heard right, I’m looking forward to it, meaning I won’t be dropping the show and that Flash Facts isn’t cancelled. While this season hasn’t been stellar, there are still nuggets of good story-telling here and the fact that the show runners have said that they’ll be continuing the non-speedster main villain into Season 5, I’m kinda hopeful!

So, for now, I’ll just thank you all for sticking with me this past year and for your continued readership and, as always…