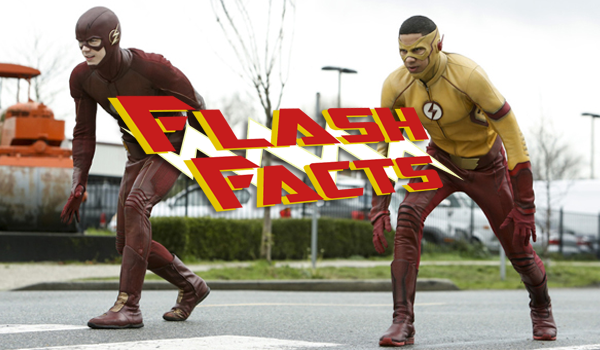 I have to wonder what the pool of potential villains looks like on the CW shows.

The Flash has one of the most interesting and eclectic rogues galleries outside of Batman and this week we get the nefarious Clive Yorkin! A man named Clive is our baddie. He doesn’t even have a villain name! Sometimes this show is a veritable Who’s That? of nobodies and jobbers. This could have easily been Black Hand but nooooo, it had to be Clive.

Moving on to the meat of the episode; the training of Kid Flash. It’s not going well. For a guy trained by some of the greatest speedsters in history, Barry sucks at passing on that knowledge but he’s willing to admit his shortcomings so that’s something.

The focus is mostly on Wally for the episode but we still take time to check in on the newest ship; Snowbert. Danielle Panabaker and Tom Felton have the kind of awkward, fumbling interest in each other that’s usually been Caitlin’s M.O. for the past few seasons.

We also get a complete reversal on Iris going full death wish with an emotional breakdown followed by a confession to her dad and fair play to Jesse L. Martin this episode for juggling light-hearted date shenanigans with a powerful speech to Barry.

In the end, Kid Flash defeats Clive after finally mastering the phasing trick and magically cures Iris who had been affected by Clive’s death touch? I mean, it made sense that Clive was neutralised but how does that affect Iris who was already infected? I dunno… Kind of a weak sauce resolution that leads to Barry and Iris canoodling on the couch and Snowbert go for a drink. Everything is hunky dory!

Untouchable is kind of a filler episode with an ultimately forgettable villain that posed more of a threat than he really should have given his status but we get development for Wally, Caitlin and Julian so it’s not all bad. Next week sees the return of Harry Wells, Gorilla Grodd and the introduction of the sweetest guest voice actor yet when we see the Attack on Gorilla City.