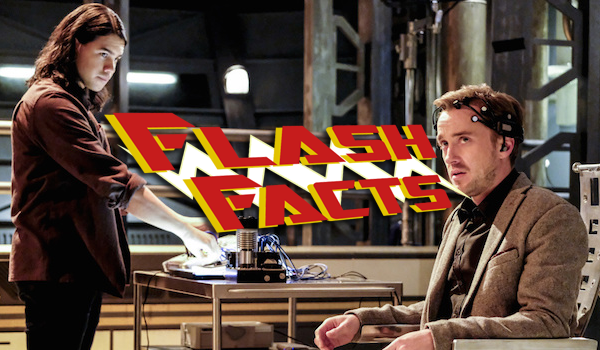 Flash Facts – “The Wrath of Savitar”

Oh my sweet and merciful maker, what the hell is wrong with everyone? Why are they this stupid?

Narrative convenience mostly, but still! Caitlin hiding a shard of the Philosopher’s Stone, Wally keeping his visions secret, everything Barry has done ever… Which is a theme of this episode, really. While everyone has fucked up, and boy do they fuck up, Barry fucks up harder.

This Machiavellian scheme he’s put into play to save Iris is coming back to bite him in the arse before it’s even left his head! The idea that Barry can do no wrong has fully inverted itself as he, seemingly, tries to emulate Harrison Wells (the Thawne one) in his quest to save the damsel and it goes wrong with every step.

Even the proposal to Iris is executed poorly when a Joe pulls him aside to call him out on not asking permission, something that Joe has drilled into Barry’s head before. Again, Jesse L Martin tearing up (and he does it a lot in this episode) cuts me to the core.

Wally… Poor, stupid Wally… He got it bad this episode and that sucks. It’s like the stinger to the season 2 finale of Agents of SHIELD but worse because BARRY COULD HAVE DONE SOMETHING. I’ve really got nothing else to say about it just… Damn.

With Savitar’s release, and even leading up to it, we get some very interesting lines. It almost seems like foreshadowing so stay with me here because it’s speculation time. Savitar is Barry. Repeatedly in this episode, we get lines like “You created me”, “I created myself” and perhaps the most important one; “I’m the future, Flash.”

Now, what if, and I’m stretching here but what if; while it’s spoken like it’s written above, the devil is in the details and the line is actually “I’m the future Flash.” Dropping that comma completely changes the context and could definitely point to Savitar’s true identity, especially considering the reversed lightning bolt on Savitar’s chest. Also, isn’t the physical suit super-neat? It reminds me of the kind of practical suit effects you see in tokusatsu.

This episode was pretty heavy, despite the laughably stupid actions of the characters involved, and it only promises to get heavier as the ghosts of Barry’s past come back to haunt him when we venture back Into the Speed Force.