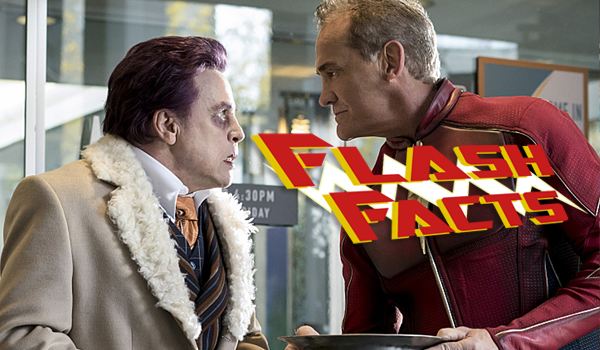 Because The Present can mean both the current period of tiiiiiiime because the show has a ton of time travel and an actual present like the apartment Barry gets for Iriiiiiiiiiiisssssss… Haaaaaaaaaa.

It’s a pity that my favourite part of this episode was over in less than 5 minutes because I could really go for more John Wesley Shipp and Mark Hamill. Reprising their respective Flash ’93 roles again is a pretty neat little gift for the audience, even if Earth-3’s Trickster looks… weird.

Seeing the veteran speedster gets his shit rocked by the uber intimidating Savitar was painful but only because of the really ropey CGI. I swear I saw the model went into it’s default stance after tossing Jay through a portal too. Choppy editing, that.

Tom Felton did a cracking job. Whether it was the disbelief of finding out Barry is the Flash or having Savitar speak through him, he gave a terrific performance throughout.

And Carlos Valdes, actually. He killed it with the guest-starring Nick Gonzales as undead projection, Dante.

I have to wonder how Barry can fuck up the future as well… I bet he can, because Savitar says he does and I can totally believe that, I just wonder how. I wonder if it’ll be a case of Iris-murder leading to Barry seriously damaging Savitar. We’ll see.

But what really put me in a foul mood with the absolutely insipid Christmas sections. It’s something I truly despise about television at this time of year. I took one look at the lavishly beautiful Christmas setup at the West house and I hated them all, because no Christmas looks like that and that kind of over saturated merriment is ever pervasive and taints what was an otherwise solid episode.

And that’s it for Flash Facts this year and probably the last you’ll see from me until the new year because there’s no way I’m covering the Doctor Who Christmas Special. I refuse. You couldn’t pay me to do it.

Anyway, we’ll be back in a Flash in the new year so Happy Holidays from your friendly, shit-tier reviewer – Sharp-O!